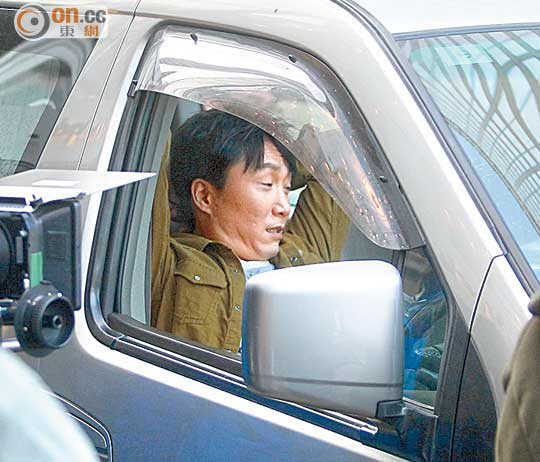 Annie Liu (Lau Sum Yau) and Ronald Cheng Chung Kei have been working on their new film for days. Yesterday around 5PM they worked on location at Central. Sum Yau carried a big box and quickly got into Cheng Chung Kei's vehicle.

Because it was the end of the business day and the traffic, Sum Yau during the shoot was hindered by passing cars. Finally she had to go back and forth many times before the director accepted a take. As for Cheng Chung Kei who only had to perform inside the vehicle, while waiting he got some shut eye and often stretched.

Cheng Chung Kei and Susanne So San earlier worked on their new film KEI YUEN FUI GOO LEUNG (STRANGE ADVENTURE CINDERELLA). Whenever Ronald completed a shot he went to watch the playback with the director. Ronald's daughter earlier had bronchitis. He explained that they got a X-ray only because of she was short of breath. Would he have a Year of the Horse baby to keep his daughter company? He said that like Sandra Ng Kwan Yu said, the more he wanted it the less he got. Earlier he had to work during Christmas and could not go on vacation with his family. He of course bought a gift for his daughter. "She really likes to eat, so I bought a kitchen for her."

Actor, assistant producer and singer Amy lamented how difficult working two jobs at the same time was. Next year she will release a record. She has been so busy that she lacked rest. "I have been sick a few times, I will write the songs, the lyrics and produce them on my record. I hope it will be release in the New Year. I really look forward to the birth of this baby."
Posted by hktopten at 6:05 PM