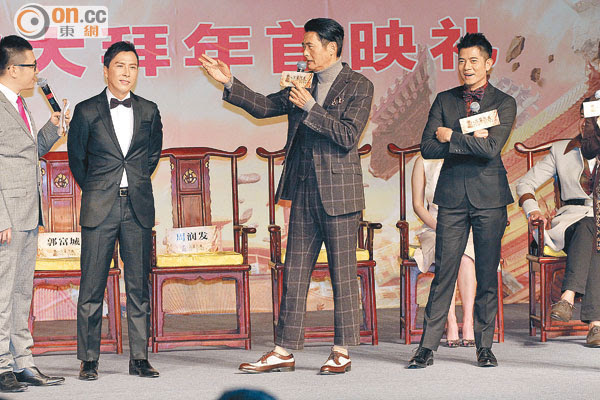 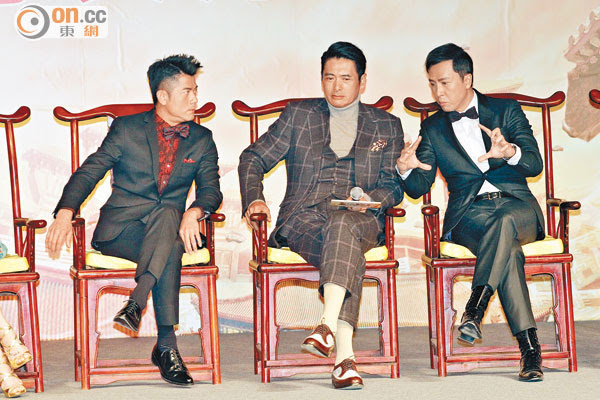 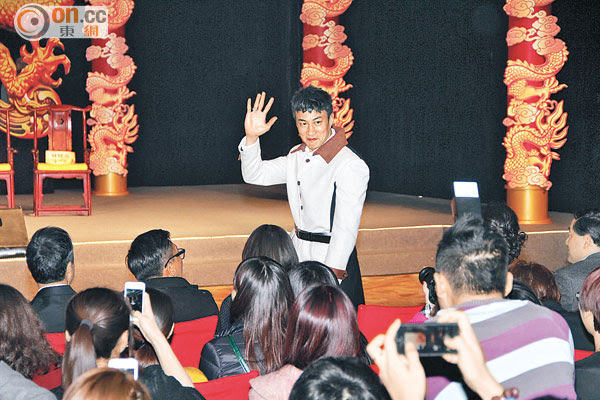 Chow Yun Fat yesterday with Donnie Yen Chi Tan and Aaron Kwok Fu Sing gathered in Beijing to attend the Lunar New Year film THE MONKEY KING (SAI YAU GEI ji DAI LAU TIN GUNG) press conference. Jade Emperor Chow Yun Fat first crowned Yen Chi Tan "the Strongest in the Universe Pretty Monkey King" but soon after Fat Gor said that he hoped Yen Chi Tan's temper would be a little better after making this film; Yen Chi Tan returned the favor on the stage and said that due to Fat Gor's high salary, he could not miss a single moment of the production; Sing Sing smoothed things out and said that he understood that Yen Chi Tan was working multiple jobs. Seemingly on and off cameras the superstars were competing in acting. Were they truly made or were they promoting?

Yesterday three superstars Chow Yun Fat, Yen Chi Tan and Kwok Fu Sing gathered in Beijing with Joe Chen Chiao-En, Peter Ho Yun Tung, Zhang Zilin and others for the film THE MONKEY KING's press conference and global premiere. The film will officially open on Lunar New Year's Day. At the press conference, Chow Yun Fat became the focus. He said that everyone used to say Yen Chi Tan was the strongest in the universe, after watching this film they would know the best fighter was Sun Wukong. With the strongest 3D special effects, he was the "strongest in the universe Pretty Monkey King". However, Chow Yun Fat added that he hoped Yen Chi Tan's temper would be better after making this film. When Yen Chi Tan spoke, he replied with a smile, "I am very honored to be able to work with Fat Gor and Sing Sing, this is a dream team. Also because of Fat Gor's high salary, he can't miss a single moment. Fat Gor has to look cool when he appears."

When some Mainland actor mistakenly described the film as a domestically produced 3D film, Fat Gor humorously said, "An U.S. company did the post production for this film, it isn't a domestic film." Then when Fat Gor talked about his character, he said that his impression of the Jade Emperor was just sitting, eating fruits while enjoying beauties dance. Only he had to act with a piece of cloth and played action star. Thus he could only get himself drunk to be able to imagine beauties dancing around him.

As Fat Gor got on a row, he even set up action director Chi Tan and revealed that he had a bad temper. "Chi Tan's special effect make up took several hours, after that he had to fight. When he didn't have to fight he had to tell others who to fight on the set. Sometimes he would not be able to control his temper. This time he truly was abused enough. Later he rested and his temper would gradually improve." Chi Tan after hearing could not help but laugh, then struck back and said, "Since you are so humorous, I have a few replies for you. You are very expensive, so I cherish every shot of you very much especially with Fat Soh next to
me. I no longer couldn't have any mistake from the crew but Fat Gor also had to look cool when he appeared!"  Afraid that Chi Tan would continue to share, Fat Gor interrupted Chi Tan with the reason of being out of time and changed the subject. He said that Chi Tan's Sun Wukong was truly the strongest in the universe. Was Fat Gor afraid of making Chi Tan mad? He said, "What is there to be afraid of? I don't have to coax him, he is much better now."

Chi Tan said about revealing Fat Gor's high salary, "It's not a money problem, it's not easy to make him move. (He said that your temper was bad?) He's joking, would you rather he yell at himself! (Are you too demanding?) I have always been." Sing Sing said that he would like to work with him on a martial art dance film. Chi Tan immediately showed off his twist, which surprised Sing Sing who also said that he could consider it.

Kwok Fu Sing then tried to smooth things over. He understood that Yen Chi Tan had many jobs on his hand. Since he was demanding on himself, sometimes he would be frustrated that the crew was unable to coordinate. He also had a lot to be concerned with, thus he would even more frustrated when time was spent on the lack of coordination. However he too hoped that Yen Chi Tan would be able to watch his temper.

Later, Yen Chi Tan said that everyone was just joking around. Thus he would not be upset with what Fat Gor said. He said that often he would only be demanding on himself. He would sympathize mostly with actors. In addition Fat Gor and Sing Sing were used to making movies, they needed even less reminder before they were in character.

Playing Princess Iron Fan, Chen Chiao-En praised Kwok Fu Sing as the most handsome "Bull Demon King". Sing Sing even joked about making a prequel and a honeymoon scene with Chiao-En. "I really want to know how the Bull Demon King got Prince Iron Fan pregnant, then intimate scenes would be definite! I also want to know Bull Demon King does it!"

Speaking of Derek Yee Tung Sing blasting actors for lacking actor ethics, Sing Sing said, "This year I have to spend eight months on two movies, but I absolutely wouldn't shoot every two days. That would affect the film production process!"
Posted by hktopten at 1:08 PM