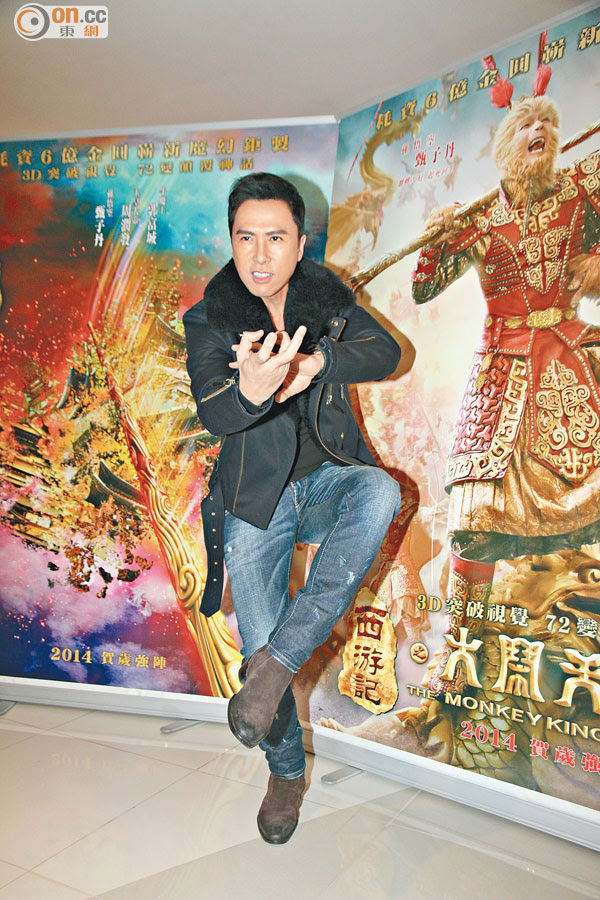 Donnie Yen Chi Tan in the Lunar New Year film THE MONKEY KING (DAI LAU TIN GUNG) played Sun Wukong. In order to bring the character to life, during the shoot he would often improvise gestures. He said that on the first day when he was working with the Jade Emperor Chow Yun Fat, he launched a sneak attack on Fat Gor. Fat Gor of course was able to block it. Chi Tan said, "Later Fat Gor said to me, 'Chi Tan you are mischievous!' I said to Fat Gor I wasn't mischievous, it was Sun Wukong."

Yen Chi Tan was not worried that the audience would not recognize him as Sun Wukong and thought it was a double, in the close up shots a look at his eyes would tell it was him. He said, "I too hope that everyone would feel it isn't me, because after the success of Ip Man I have been looking for any role that I can still play, how to break through myself. When the director asked me to play Sun Wukong, I felt that this was the opportunity. Although the pressure was enormous, it was also very challenging."

Stephen Chow Sing Chi's Sun Wukong in CHINESE ODYSSEY (SAI YAU GEI) was very memorable. Was he afraid that the audience would compare him to Chow Sing Chi? Yen Chi Tan said that in the past 10 years everyone's interpretations of Sun Wukong including Sing Yeh's have been repetitive, not the Sun Wukong from his childhood. He hoped to be able to return Sun Wukong to its innocence. Chi Tan said, "Sing Yeh's Sun Wukong is more city, more human. I was animal like, more childlike. I felt that Sun Wukong was a child. In my search for how to play Sun Wukong, one day I saw my son kept jumping on the sofa at home and I was inspired. That was the Sun Wukong I wanted. Sun Wukong was very mischievous, very much like a child. Monkeys steal peaches because they were delicious. Their hands were itchy."

Yen Chi Tan battled on the set but was not injured. He said, "My injuries are accumulated from years of film productions, they are job related. My spine has problems around my neck and my back. Sometimes when I sleep the pain would wake me."

Would he make less action film? He humorously said, "Then I would have no movie to make!" He pointed out that the name Yen Chi Tan was connected to action. Viewers would remember "one against ten", so I am working while I can. The fire is still burning in my heart, I have a lot of creativity that I want to work with. Whether with film characters or action I have a lot of new ideas. Unless one day I no longer have new ideas and feel bored, then I would retreat to behind the scenes. In the next two years I still have fire and impulse.
Posted by hktopten at 1:15 PM