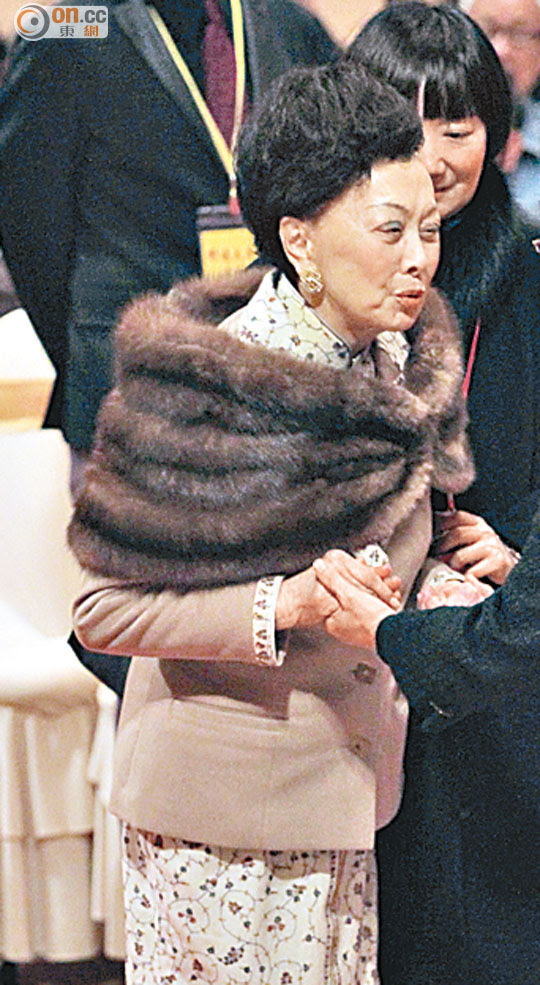 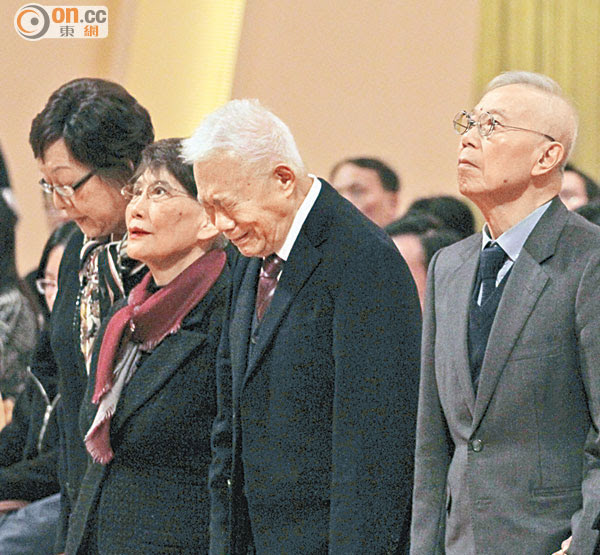 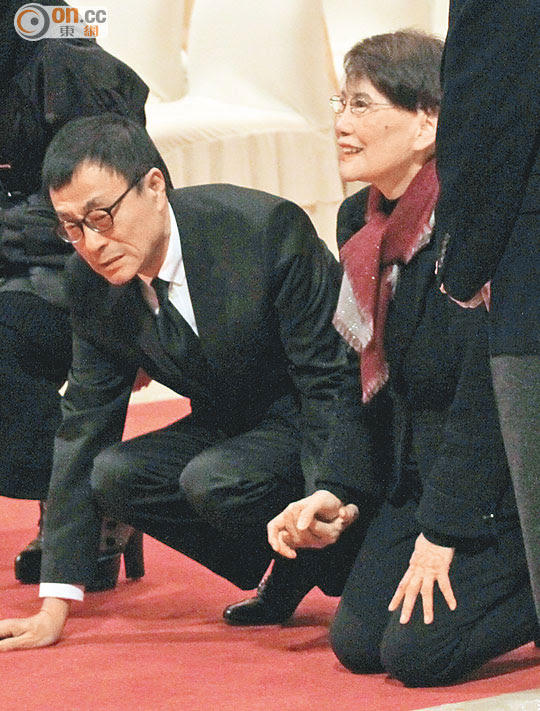 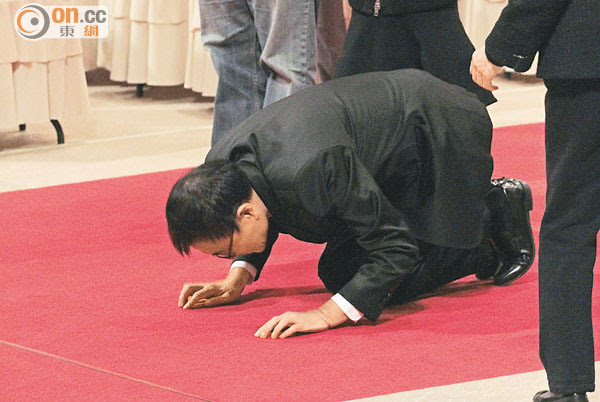 Film and television tycoon Sir Run Run Shaw passed away on the 7th at the age of 106. Yesterday a memorial event took place at the Tseung Kwan O Shaw Studios. From 10AM to 6PM, politicians, business people, scholars and artists, performing artists, TVB artists and employees, past Shaw employees, charity organization representatives and ordinary people came to pay their respects to Uncle Six. The stream never stopped. The memorial hall was decorated mainly with orange and yellow. A 20 foot tall photo was placed in the hall center. In the photo Uncle Six displayed his kind smile. 400 seats were placed in the hall, without any fresh flower decoration. Piano music played lightly and the atmosphere was solemn yet simple. The decoration originally was used the Shaw Award presentation. Shaw Yat Fu's widow Mona Fong Yat Wa and his two sons Shaw Wai Ming and Shaw Wai Chung attended. TVB arranged for 12 artists to greet guests at the hall.

Aunt Six Fong Yat Wa arrived around 9:15AM and took care of everything personally. She felt that guests might not be able to see the family seating clearly. She moved the chairs and lined them up again; she also picked up any trash that she spotted. The memorial event began at 10AM, but around 9AM TVB executives and important politicians have already arrived.

Liu Chia-Chang arrived at 10PM. When Aunt Six approached, he suddenly went to his knees in front of Uncle Six's photo and bowed twice. Even Shirley Cheung Yuk Shan and Aunt Six who were by his side followed his lead to bid Uncle Six farewell. Liu Chia-Chang was emotional and teary eyed. When he left he said, "Sir Shaw was the person I respected the most, with his passing, I have one less person who cares for me. I will always remember him, I miss him very much." Speaking of kneeling and bowing to Uncle Six, he broke down, turned around and left. Also a friend of Uncle and Aunt Six, Liu Chia-Chang's wife Chen Chen and their son Jeremy Liu arrived at noon. They seemed to be deliberately avoiding each other.

After the event ended Aunt Six first bowed to the media sections on both sides in appreciation, saying thanks to everyone for supporting Uncle Six and going through all the troubles. She also met with Dr. Norman Leung Nai Pang and reporters, again thanking them. Was she pleased with the memorial event arrangement? She smiled and nodded. Reporters asked how she was and Leung Nai Pang answered on her behalf, saying that she was much better. Leung Nai Pang said that this memorial arrangement was more special, solemn yet guests would not feel the sorrow. He said that Uncle Six was easy going and not a stickler for details. Sister Fong wanted for Uncle Six's friends to pay their respects without feeling sad about his absence. He said that since Uncle Six would have been 107, he had to be remembered in a light manner. Uncle Six's ashes would be transported to Singapore for burial.

Once serving Shaw but later was rumored to be at odds and started another company, Golden Harvest founder Raymond Chow Man Wai yesterday attended the memorial event with his wife and daughter to show their sincerity. Another Golden Harvest boss Choi Wing Cheong also attended, with Andrew Lau Wai Keung and Eric Tsang Chi Wai welcoming him. Lau Tak Wa and Chung Chor Hung arrived around the same time. Lau Tak Wa removed his coat once he got out of his vehicle and walked to the memorial event in a gray suit. He put his hands together when photos were taken, but he did not accept any interview.

Chung Chor Hung attended in a black dress and pearl necklace. When reporters took photos she gave her usual graceful poses. She said, "Uncle Six and I have been to two or three film festivals. We went to Japan and Taiwan, talked about a lot about film. His state of mind was very young, very active, and took great care of people. He was a gentleman, only later did I realize that he was a great man. He contributed a lot to charity and did a lot for education. He was a good role model."

Although Aunt Six asked everyone not to wear mourning colors, most guests were dressed in black. Joey Yung Cho Yi followed Aunt Six's order the most as she appeared in a lake blue jacket and looked especially sharp with boss Albert Yeung Sau Sing, Leo Ku Kui Ke and others. As for Madame Lee she as usual appeared in a beige Chinese dress and fur. When she was about to enter the venue, a reporter praised Madame Lee and said, "Madame Lee you look very pretty, can I get a picture?" She immediately removed her glassed for the media to take pictures.
Posted by hktopten at 2:16 PM