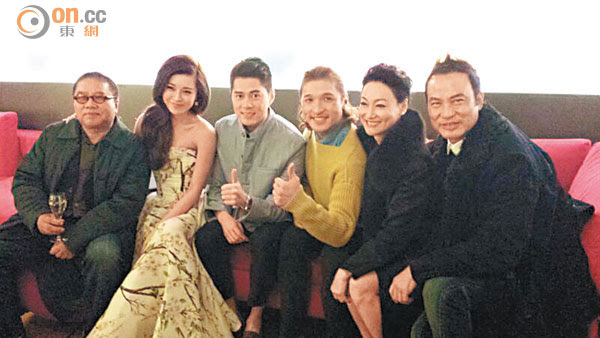 The Fruit Chan Gor directed, internet novel based THE MIDNIGHT AFTER (NA YEH LING SUN, NGOR JOR SEUNG LIU WONG GOK HOI WONG DAI BO DIK HUNG VAN) went from a discussion board to the Berlin Film Festival to have a premiere in its Panorama segment. Chan Gor led actors Janice Man Wing Shan, Kara Wai Ying Hung, Simon Yam Tat Wa and others to the press conference. He stated that this film was a pure Hong Kong film and would not be released in the Mainland. He hoped through the film to tell everyone the sorrow, the fear and the struggle to survive that Hong Kong people faced after the 1997 Hong Kong Hand Over.

Some praised the film for displaying the director's love for Hong Kong, but Mainland media after watching felt that the political metaphor within hard to understand and pointed out that film was bathed in political dog blood. Foreign media review pointed out that the film was a big doomsday mix that was hard for people to digest.

In the MIDNIGHT Berlin premiere program, director Chan Gor's narration was "when Hong Kong was handed over to China in 1997, Hong Kong people were promised a bright future. Yet now, over a decade later, Hong Kong seemed to be experiencing the worst of times. Hong Kong peoples' lives, business and political environment made people very blue. This was the most severe impact on Hong Kong in the past century. Through this film, I want to tell the world the problems that Hong Kong experienced amid drastic social changes. I even want to explore how people face fear, how we struggle to survive, and no matter what happens now and in the future how our spirit is recorded when damaged like this. We all have memories of the best of times, but they only exist in our dreams."

Chan Gor at the press conference said that MIDNIGHT will not be released in the Mainland. He also said that After the Hong Kong Hand Over, it had expectations politically and financially. However now they are very difficult as Hong Kong people are struggling a lot. "Hong Kong people cannot choose their own boss, in the past Hong Kong never talks about politics. Now politics is always with you." He said that he kept shooting Hong Kong people's living conditions. In the past many Hong Kong films avoided politics, now Hong Kong's internal conflict is truly too vicious and has to talked about. Chan Gor explained that in the film the red van passengers tried to step out of Tai Po. He wanted to examine how to bring out from his life how to save himself from a predicament. In the film American astronaut was trapped in space, the helplessness was very suitable for the film's theme.

MIDNIGHT described the story of 17 survivors in a city where several million people suddenly vanished. Hong Kong people's character and social behavior were all shrunk inside a light bus. According to Hollywood Reporter this film was a city disaster thriller that took place in a chaotic Hong Kong, filled with suspense but not horrifying as it had a lot of comedy. However it was hard for people to digest.

The film critic also said that the two hour film was between satire and science fiction thriller, it was a vulgar comedy, a B class horror and an unbearable love story. In the end it was neither fish nor fowl. However, some also praised the film for its attempt in anti genre subversive thinking was precious. The brave run toward the unknown in the end also showed the director's sincere love for Hong Kong.
Posted by hktopten at 3:16 PM