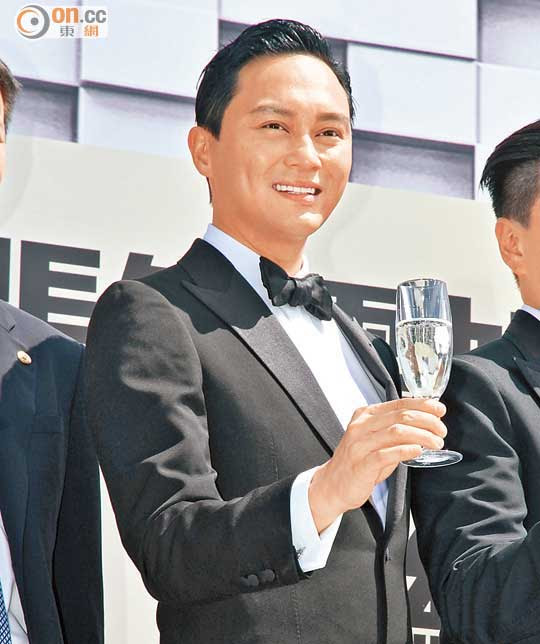 Julian Cheung Chi Lam joined with Stephen Shiu Jr., who was determined to help Chilam with his film career. He already planned to make many big films for him to star in this year. The "test" was signing Chrissie Chau Sau Na for a romance of the classes, details of which was similar to the Hollywood classic PRETTY WOMAN. This film will be titled CHIN YIK NGOK MOR OI SEUNG NGOR (HUNDRED MILLION DEVIL FALLS FOR ME, tentatively titled), the investment would exceed 50 million. The film will shoot on locaiton in Japan, Europe, the Mediterranean and even Mexico for great scenery.

The film was initially set for a costume fitting at the end of February or early March. Around April it will shoot all over the world. In the story the super rich Chillam's driver drops him off in Mongkok and he is lost. By chance he meets "MK Girl" Chau Sau Na at a bar and becomes attracted to her unique aura. He decides to use her to upset her former love, after a variety of experience they truly fall in love! Playing the "Hong Kong Richard Gere" Chilam's character may be flawed but has endless ways to get the girl, including taking his girlfriend to Japan for Ramen, to Paris for the latest brand name handbag shopping. He hits women right where they hurt. Sister Na naturally cannot escape Cool Demon's grasp.

Reportedly, Stephen Shiu Jr. saw Sister Na's potential in the film industry and already signed her to many films in support. This time he played the pair of aces in his hand, naturally he had no room for error. The script was still being worked on for it to be perfect before production. Stephen Shiu Jr. admitted, "Such a project exists. (Would Chilam and Sister Na have love or bed scene?) This is inevitable, back then Richard Gere and Julia Roberts had similar performance." As for Sister Na she replied through her manager, "Actually since RETURN OF THE CUCKOO (SUP YUET CHOR NG DIK YUET GUONG) I already admired Chilam very much. Earlier I even fell under 'Cool Demon's spell, being able to work with him of course would be good. Playing 'Cool Soh' I am very satisfied!" Chilam joked, "Everything is false, the most important is to hurry up and show me the script. (You will get to shoot on location and luxurious indulgence.) It's just a movie, not like it's real."

Japanese series HANZAWA NAOKI's villain and supporting actor king Teruyuki Kagawa due to the success of the series in Hong Kong caught Stephen Shiu Jr.'s eyes. He approached him to guest star in CHIN YIK GWAI MOR OI SEUNG NGOR and play a rich Japanese businessman and a rival of Cheung Chi Lam.

Stephen Shiu Jr. yesterday admitted that he made the offer to Teruyuki Kagawa. He revealed that at first in order to convince her he went to meet with him in Japan twice. He even said, "We really hoped he could come to work in Hong Kong. Luckily in the end we succeeded. (Reportedly Teruyuki Kagawa will guest star for 5 days, for HK$1 million a day?) This is a business secret, I can't tell you. Since we can invite him here, the offer absolutely wouldn't be low!"

Reportedly because Stephen Shiu Jr's father often criticized the Mainland and the the presumptive Chief Executive C.Y. Leung, the Mainland out of angered declined to approve BAUHINIA. After two years, BAUHINIA has been defrosted with Sister Na's addition.

Juno's management company yesterday said, "We talked with Mr. Shiu, after reading the script Juno is interested. However because he has his own movie to make this year, now we have to check his schedule. If we can accommodate we absolutely would consider it."

Sister Na said, "This contract gives me the chance to try different characters. I thank him for the opportunity. I won't disappoint, I will work hard." Always wanted to be an action actress, Sister Na said, "I look forward to different attempts, aside from action I also want to try romance." As for how sexy she would be, she said, "I haven't thought about it particularly. It will depend on the script and the role. My bottom line is pretty high."

As for the director change, Stephen Shiu Jr. said, "Last year I saw Juno's movie, which was a great piece of work. I really want to work with him. The detailed negotiations are almost done. I feel BAUHINIA is a young people movie, very suitable for Juno to direct. Now Brother Cheong and I are still good friends."

As for lead actor, The film company also had initial choices. Stephen Shiu Jr. said, "Ko Chen-Tung is very suitable. The film has a big villain that I intend for Ng Chun Yu to play." Because of BAUHINIA will be an action film, he would like to call in a favor and ask Donnie Yen Chi Tan to be the action director. "I of course want Chi Tan's help, but his schedule makes it a little difficult." Back then BAUHINIA was the talk of the town, but after two years was he worried that the fever has passed? Stephen Shiu Jr. was very confident. "I don't want to make it for gimmick, making it now instead the timing is perfect. Although the script is here, because of the different director it would change a little."
Posted by hktopten at 5:57 PM