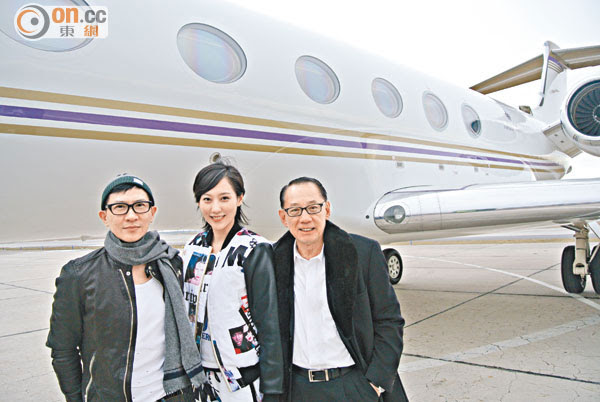 The 64th Berlin International Film Festival this year not only has Hong Kong representative Tony Leung Chiu Wai on the jury, but also the Emperor Motion Picture THAT DEMON WITHIN (MOR GAING) and the internet novel based THE MIDNIGHT AFTER (NA YEH LING SUN NGOR JOR SEUNG WONG GOK HOI WONG DAI BO DIK HUNG VAN) in its Panorama segment. The actors have already arrived there to attend press conferences and premieres.

Emperor Motion Picture THAT DEMON WITHIN was not only selected for the Berlin Film Festival Panorama segment but also for the Hong Kong International Film Festival closing film. Lead actor Nick Cheung Ka Fai and new comer Christie Si Xuan received boss Albert Yeung Sau Sing's arrangement to take his private jet to Berlin. Ka Fai humbly said about the boss' treatment, "Any support of the boss to his actors is very meaning. I only did my best, I also hope I can promote the Hong Kong film to the international film scene."

Ka Fai mentioned that the last time he came to Berlin was for his film THE BEAST STALKER (JING YUN). At the time he came with director Dante Lam Chiu Yin. He never thought that 5 years later they would have another film that would be selected. As soon as he arrived this time Ka Fai asked endlessly about the weather. Actually the last time he came Berlin was very cold, which gave Lam Chiu Yin a chill. Luckily this time it was warmer and he no longer had to worry about getting a cold.

New comer Si Xuan's first lead role was selected for the Berlin Film Festival. Both excited and honored, she prepared a lot of clothes for the premiere and the press conference. From the Northeast she said that she was able to take the chill but this time she did not choose anything sexy specifically. "I feel that clothes that can display my individuality is the most important. For my first global premiere, I am afraid that at the premiere I would get emotional and become a crybaby."

Arriving from the U.S., Daniel Wu (Ng Yin Cho) attended the Berlin Film Festival last time with BISHONEN. Returning years later he felt that Berlin changed a lot. He felt the return was very meaningful. Mr. Yeung also prepared a big lai see for him to wish for good health for him and his family.

THAT DEMON WITHIN last time held its global premiere. Director Lam Chiu Yin first went to the premiere venue with over 60 years of history, Zoo Palast, to observe. The 800 tickets were already sold out. THAT DEMON WITHIN was selected to be the Hong Kong International Film Festival closing film, for which Lam Chiu Yin felt very honored. "This film is different in style from my previous work. The actors also surpass their past performance. The film has more emotional scenes, I look forward to the audience's reaction."

After the premiere the group went to The Grill Royal for the celebration. Originally the film company arranged for a ride for them back to the hotel, but Ka Fai felt that the weather was so good that he asked everyone to walk back together.

The Fruit Chan Gor directed THE MIDNIGHT AFTER two nights ago held its press conference. Actors Simon Yam Tat Wa, Janice Man Wing Shan, Kara Wai Ying Hung, Tsui Tin Yau, Wong Yau Nam and others attended. Chan Gor stated that the film will have a sequel and move from Tai Po to Kowloon. However he joked that he did not know whether he would have enough funding. Speaking of the film's political metaphor and foul language, Chan Gor pointed out that this was a Hong Kong film. He never considered the Mainland market, so he made it like this. Working with Chan Gor for the second time, Brother Wa praised him not only for his narrative angle but also his ability to dig in the challenges that Hong Kong will face. He respected him very much. Although many worried that the film would close weakly like the original work, after the premiere the audience applauded for two minutes and the response was decent.