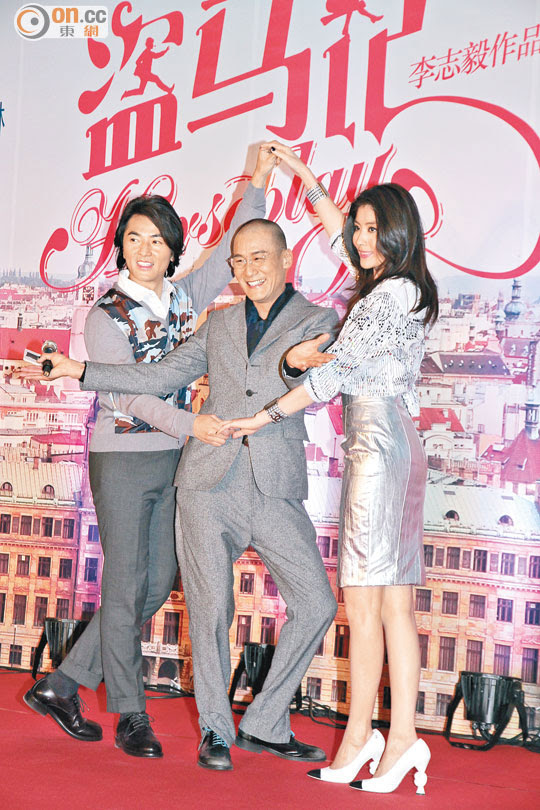 The film HORSEPLAY (DOH MA GEI) yesterday held a Beijing press conference. Lead actors Tony Leung Ka Fai, Dior Cheng Yi Kin and Kelly Chen Wai Lam attended, with over 100 reporters on hand. The trailer was shown at the conference. Playing a master thief Leung Ka Fai stole the spotlight. He appeared in a woman and a nun disguise, then he transformed into a "hunchback". No wonder he said that he lost count of how many costumes he had. Kelly praised Leung Ka Fai's legs were the best in drag, as they were thin like a woman's. "Because of that, I have to wear high heels and get a manicure to see who is more feminine."

Leung Ka Fai was injured while shooting HORSEPLAY in Prague. Luckily his injury did not affect the progress. Speaking of working with Ekin again, he said, "In Ekin's first film ALWAYS BE THE WINNERS (SUN LUNG DOH SING ji KEI HOI DUK SING) we already worked together. He is no longer a 'kid', he has become mature and tasteful."

Ekin after 20 years worked with Leung Ka Fai again. He remembered that back then he was given the advice of having a goal. He revealed that back then he waited for Leung Ka Fai to start work for 40 hours. "He was very busy, but he also taught me to set a goal like buying a home. Several years later we ran into each other again, when he learned that I already bought a home he was so excited that he screamed." Ekin worked on dangerous stunts overseas. Even overseas stunt people said that they could not do it, but he personally demonstrated how to jump onto a fast moving car. Speaking of Yoyo Mung Ka Wai's skiing injury in Japan, Ekin said, "She injured her ligament. Currently she needs rest. The old lady never stops, when I am not at home my family is taking care of her."

When Kelly left Hong Kong to make HORSEPLAY she missed her sons the most. "When I was overseas, my family sent me videos. When my son heard the doorbell at home, he thought that Mommy was home. Later because he didn't see me he cried. When I saw the video I was teary eyed." She had a minor accident when she was working on the rock climbing scene. When she fell she also hit the camera rails. Someone sent the accident video to Kelly's husband, who did not respond because she saw his wife was still moving around at will!
Posted by hktopten at 1:27 PM