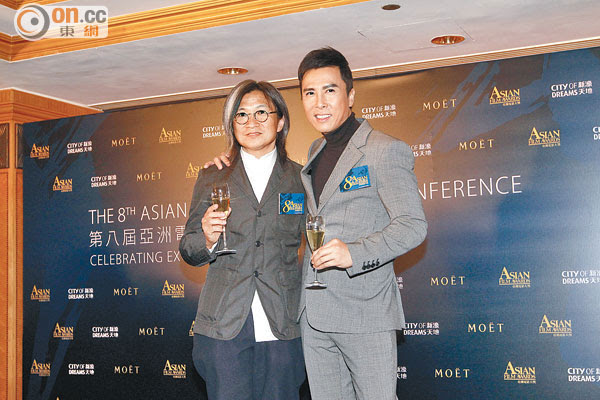 The 8th Asian Film Awards will take place on March 27 in Macau. Yesterday the nominations were announced. Among the 14 categories, Wong Kar Wai's THE GRANDMASTER (YUT DOI JUNG SI) received the most nomination with 11. They included Best Film, Best Director, Best Actor and Best Actress; SNOWPIERCER, STRAY DOGS and RIGOR MORTIS each received 4 nominations. Tony Leung Chiu Wai with THE GRANDMASTER was nominated for Best Actor. He will not only run into the Golden Horse and Asia Pacific Film Festival winner Lee Kang Sheng but also face LIKE FATHER, LIKE SON's Masaharu Fukuyama and THE ATTORNEY's Song Kang-Ho.

Nina Paw Hee Ching with RIGOR MORTIS will compete against the multiple Best Actress award winner with THE GRANDMASTER, Zhang Ziyi, and COLD EYES' Han Hyo-Joo. Sister Paw's performance in RIGOR MORTIS was outstanding and received overall raves, international actress Zhang Ziyi ultimately had a better chance as many considered the award as good as hers.

Wong Kar Wai was very happy to hear about THE GRANDMASTER's 11 nominations. Currently at the Berlin Film Festival, Leung Chiu Wai was just as happy about the nominations. He was happy that he was nominated for Best Actor, but the credit did not belong to him alone. It was the result of the team's hard work.

Best Actress nominee Sister Paw said that she was very happy to receive an Asian award nomination, but she did not long for winning; she instead picked Zhang Ziyi and felt that Zhang Ziyi could be said as invincible and having no competition. She said, "I am used to being support, this time I don't mind continuing to play green leaf."

Donnie Yen Chi Tan was also one of the jury members, but when Asian Film Award Academy executive committee and Hong Kong International Film Festival Society chair Alfred Wong Ying Wai introduced Yen Chi Tan he turned star class juror into "star wet juror"; later, Yen Chi Tan said that he did not mind and did not feel awkward. First time on the jury, Yen Chi Tan said that he had an idea about Best Actor and Best Actress but he could not say. He would not favor Hong Kong film either and would be just and fair. Speaking of THE MONKEY KING (SAI YAU GEI ji DAI LAU TIN GUNG)'s Mainland cumulative box office of 1 billion RMB, Yen Chi Tan expressed thanks to everyone for their support; "At first the boss said that both success and failure would be attributed to me. I had a lot of pressure. I have already done my best, I didn't disappoint anyone."