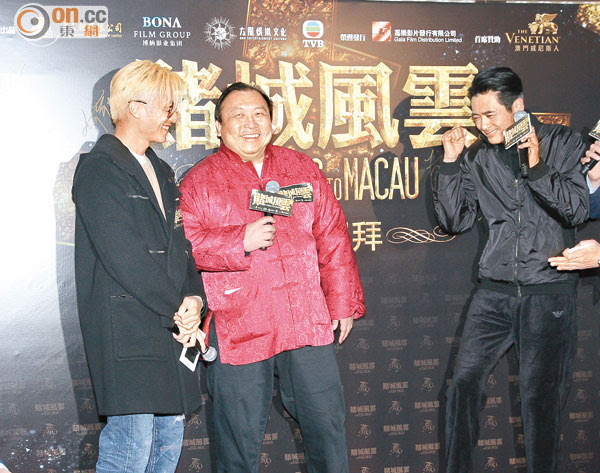 Chow Yun Fat and Nicholas Tse Ting Fung teamed up on the Lunar New Year film FROM VEGAS TO MACAU (DOH SING FUNG WON), which held a celebration in Hong Kong last night. The film made over HK$31.5 million in Hong Kong and over 300 million yuan in the Mainland. Fat Gor and Fat Soh were dressed in black, while Tse Ting Fung stole the spotlight with his blond hair. Fat Gor joked that he could not be close to Wong Jing all the time because when he did they were always eating and he could easily get fat. Instead being close to Tse Ting Fung he would be encouraged to lose weight; when Fat Gor learned that Ting Fung weighed 147 pounds, he said that when he started in the business he was only 144 pounds. Thus he swore to drop to that weight and be thinner than Ting Fung.

VEGAS executive producer Wong Jing said that due to the ideal box office, he wanted to make another movie with Chow Yun Fat and Tse Ting Fung. He even jokingly suggested for them to make BROKEBACK MOUNTAIN. Fat Gor was all for it and said, "I like chok guys like this, I heard Ting Fung was a pretty good kisser." Ting Fung said that if they do he would have to lose more weight.

However, actually Ting Fung would like to make a gun fight film with Fat Gor again. He wanted to bring back Mark Gor and he would not mind playing any role. Yet, Fat Gor said that Ting Fung earlier already worked on a gun fight film with Jay Chou (Chow Kit Lun), so if they do, adding Chow Kit Lun would be better. He said that he was too old to carry heavy guns, he might still be able to handle small guns. Fat Gor instead wanted to play a mute, which would be challenging since he has never played one.

Fat Gor also paid attention to the Hong Kong Film Award nominations. He said that this year the nominations of two Ip Mans (Tony Leung Chiu Wai and Anthony Wong Chau Sun) were truly amazing, but he was the happiest that Max Zhang Jin was nominated for Best Supporting Actor. He felt that Zhang has toiled for many years and deserved the nomination. Speaking of Fat Gor's two Lunar New Year films making him a big winner with a combined box office of 1 billion, Fat Gor said that it had nothing to do with him. Reporters pointed out that he had profit sharing. Fat Gor said, "It won't get into my pocket, just my wife's pocket!"

With a head of blond hair, Ting Fung will head to Australia Friday for a food program. He said that he had no girlfriend so he did not mind. If he did he would admit it. As for his earlier visit with his sons, he had no comment.
Posted by hktopten at 12:59 PM