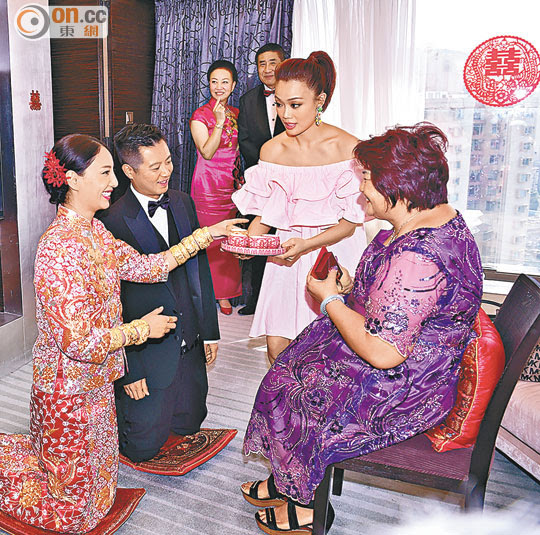 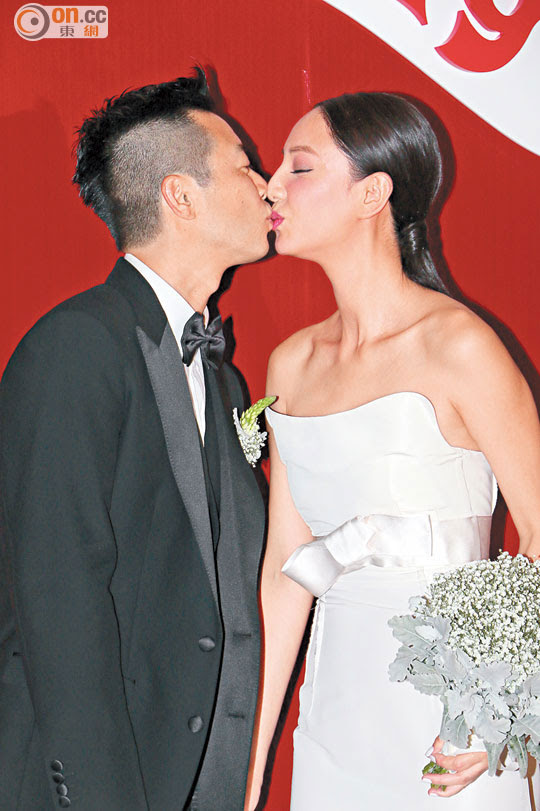 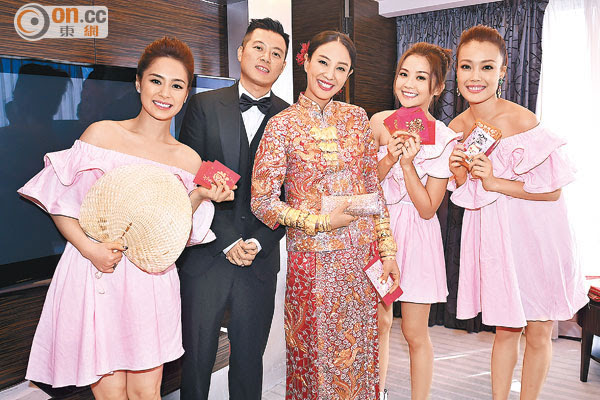 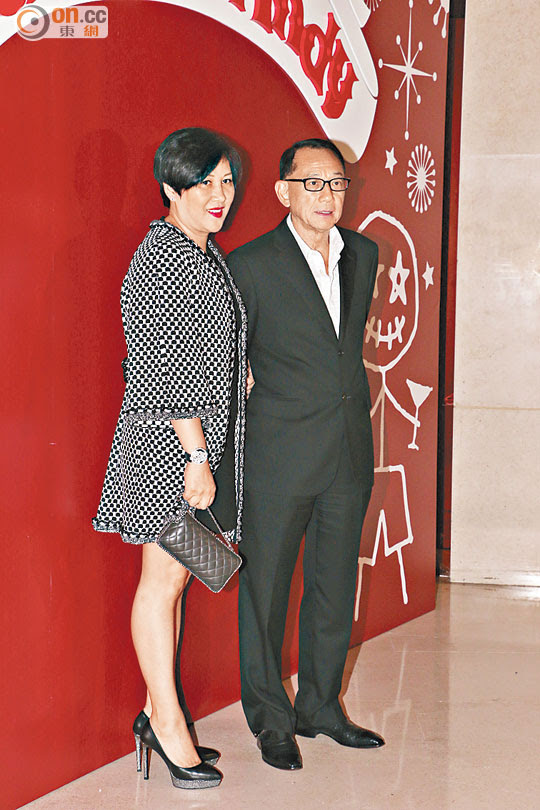 Yumiko Cheng Hei Yi yesterday wed make up artist Andy Leung Hok Chu after a 9 year long relationship and invited friends in love Joey Yung Cho Yi and Wilfred Lau Ho Lung to be in their wedding party and rehearse for their future wedding. Cheng Hei Yi even stated that she would toss the bouquet to Yung Chi Yi. She and Lau Ho Lung gladly accepted.

Cheng Hei Yi and Leung Hok Chu had their bride pick up ceremony in their Sai Kung home during the day and at night held a 30 table wedding banquet at the Harbour Grand Hotel to share their newlywed joy with family and friends.

After the song and dance, the group continued to play in the garden. Lau Ho Lung, Chan Siu Chun and Leung Han Man had to put stockings on their heads. When they saw Lau Ho Lung's hair ruined, Ah Gil and Ah Sa could not help but crack up. Ah Gil even quickly took a photo. Ying Choi Yi gave her baby sponsored dirty diapers for everyone to try. After three rounds, Leung Hok Chu loudly read the "love declaration" that Wong Yi Man made up to look like a joint account application and presented two door opening laisee of $19999 in total to win over his bride. The couple immediately presented tea to the elders, Ah Gil and Ah Sa played the part of wedding planners convincingly, often saying "Getting your hands caught tonight, the baby will arrive soon", "After the daughter in law tea, prettier than Ah Gil and Ah Sa" and other humorous words of good luck. Around 12PM, Cheng Hei Yi in a Chinese wedding dress, golden pig plaque, 7 pairs of wedding bangles and her husband's arm stepped out of the door with a smile and accepted her party's blessing.

Around 6PM, dressed in white Cheng Hei Yi and Leung Hok Chu met the media in the hotel lobby and kissed twice. Cheng Hei Yi revealed that her husband gave her a 4 karat diamond wedding ring and also said that she planned to toss the bouquet to Yung Cho Yi or Wong Yi Man who were in relationships. The tattoo on her right arm went from 3 to 4 figures, representing her, her parents and her husband. When would she add another character? Cheng Hei Yi said, "When we have it in the future I will, for now we have no plan." Speaking of boss Albert Yeung Sau Sing's banquet sponsorship, she said, "Mr. Yeung is very generous, investing both money and effort. Thank you very much!" Named to receive the bouquet, Yung Cho Yi after learning about Cheng Hei Yi's plan awkwardly said, "How can you talking about that! In recent years I have received several bouquets, Ah Gil caught it twice, Ah Sa has never caught it. After so many times, one more doesn't matter. I might as well catch it!" Lau Ho Lung stressed that he never imagined how his future wedding with Joey would be like and stated that many brothers were ahead of him in terms of marriage. When he learned that Cheng Hei Yi wanted to toss the bouquet to Joey, he said, "We will see if she can catch it! If she does then I act? I will worry about it when she catches it! Bouquet is an lucky item, it must be caught. I will worry about it then.

When the groom read the "love declaration" in the morning, he was next to the groom and seemed to be taking photos of Joey. Lau Ho Lung at first denied it, later he said that taking photos of his girlfriend was very normal. He said that last night he expected to drink for the groom so he already took hangover pills. He believed that Joey would not mind if he got drunk.

Ah Sa who has never caught a bouquet nervously said that she did not want it, saying that she would respond on the spot. She would only want it if she caught it. Ah Gil revealed that when the bride was picked up, the door opening laisee that Ah Sa secured vanished. No one remembered when it went, but they believed that it would be found. Already accepted her boyfriend's proposal, Wong Yi Man revealed that she is planning a wedding overseas. She hoped to find a church with sunshine and a beach for the ceremony.
Posted by hktopten at 8:28 PM