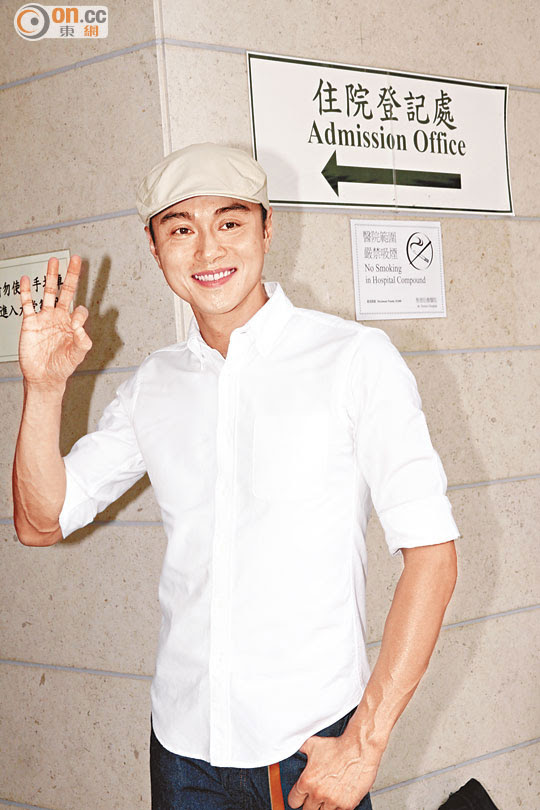 Raymond Wong Ho Yin due to the rare Behcet's disease had to resign from the TVB series CHEUNG BO JAI. After two weeks at the hospital, Wong Ho Yin was released yesterday. He spoke to the media with his manager as he stepped out of the hospital. The CHEUNG BO JAI team presented a get well card.

Wong Ho Yin said that he drastically dropped over 10 pounds after the disease, but he has risen back to over 140 pounds from 136 pounds when he was hospitalized. He pointed out that this Behcet's disease mainly was due to infection in the extremely tiny blood vessels in the body. Luckily after a full examination his major organs did not have many major problems. Would this disease affect his reproductive organs? He said, "I can only say that the blood vessels of any part of the body can have an infection, even the reproduction organ question that everyone is concerned for me about I can say that I have no problem. No one needs to worry." He said that he mainly rested the past two weeks. The doctor suggested an appropriate amount of exercise. "Now I can hike, walk for half a hour or pick my son up from school. For now excessively strenuous exercise is not suitable."

Wong Ho Yin said that months after when the disease started, his mouth turned white, his throat festered and he had tonsillitis. He said, "Even swallowing was difficult. I consider myself a tough guy, but I was worried too until I was hospitalized and took the medication. My condition immediately improved. Any drug that I took on my own was useless. In the end I had to give up working on CHEUNG BO JAI. Not being able to participate in the production is indeed regrettable, but health is important. I thank the team very much for its support." He said that his body was in good shape in general. How long he had to rest would depend on his recovery progress. He recalled performance in Australia at the end of August, he only said ten phrases on the several day long trip. His voice loss condition was very severe. Luckily he is fine now.
Posted by hktopten at 6:43 PM