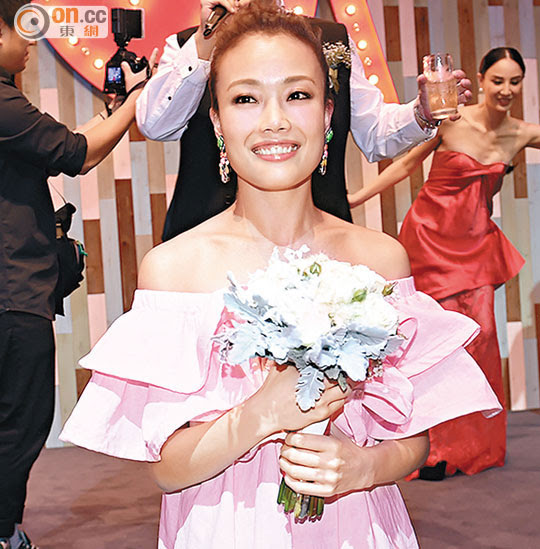 Yumiko Cheng Hei Yi and her makeup artist husband Andy Leung Hok Chu two nights ago held their wedding banquet. Yumiko entered with her father and at the wedding banquet a wedding registration signing ceremony took place. The new couple after becoming official immediately embraced in a kiss. The bride even passed her luck to good friend Joey Yung Cho Yi. Joey successfully caught the bouquet, even boss Albert Yeung Sau Sing was urged her to wed on the stage.

Yumiko wore a wedding gown for the ceremony, then changed into a fiery red evening gown. After the toast she began to toss the bouquet. The sisters were very polite, the first time the bouquet was tossed no one caught it. The second time Joey caught it and the entire venue erupted as everyone urged her and Wilfred Lau Ho Lung to wed.

The new couple left after midnight then met up for a party with friends and celebrated Yumiko's 33rd birthday yesterday. When Joey left she was asked about catching the bouquet. She said, "Thank you! The first time no one caught it, so the second time I caught it." She pointed out that even boss Yeung Sau Sing urged her to wed and even promised her to sponsor 150 table banquet, effective for ten years. However Joey said that for now she still has not thought about it! She also said that when she watched Papa Cheng entered with Yumiko she could not help but break down.

Kenny Kwan Chi Bun said that he was so busy with work that he missed the bride pick up process two days ago. He admitted that he felt a little guilty. Thus his gift would be more heavy handed. Speaking of catching the bouquet, he said that it was between "Dragon, Tiger and Panther" (Yung Cho Yi, Charlene Choi Cheuk Yin and Gillian Chung Yun Tung). He even revealed that all three were longing to wed but normally they would say that they were not. As for Hins Cheung King Hin earlier revealing that his workload was heavy he even had to turn down lead roles, Kenny helplessly said that he had to turn roles down when he did not have time. Actually he wanted to play any and all roles to fulfill his goal for buying a home.

Chin Kar Lok attended with his wife. Back then when they were involved in the Tung Wah wardrobe malfunction, Kar Lok promised that if no one would wed Yumiko he would. Finally he could relax. Kar Lok said that he was drunk; Angela Tong Ying Ying joked that he did not have to anymore. She wished the new couple parenthood soon.
Posted by hktopten at 7:21 PM