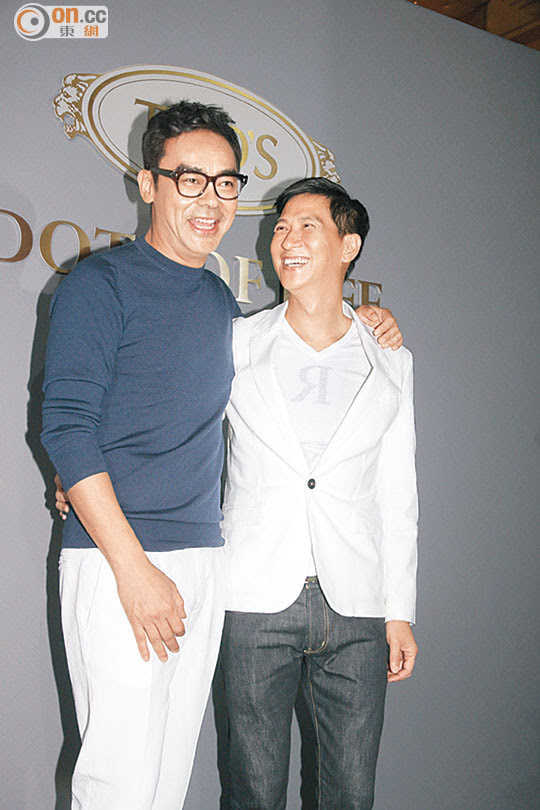 Sean Lau Ching Wan, Nick Cheung Ka Fai, Kathy Chow Man Kei, Jennifer Tse Ting Ting, Hilary Tsui Ho Ying were among the guest of the brand Tod's party at Central. Cheung Ka Fai lately has been busy with the film FROM VEGAS TO MACAU 2 (DOH SING FUNG WON 2). When asked if he has paid attention to the trouble between Mrs. Heung and Stephen Chow Sing Chi, Ka Fai said that he was not certain with either side. He has only worked with Sing Yeh once during his "Dragon" age. He said, "I had to work everyday, I didn't know what I was doing. So my feeling for him was the same. He is a very talented person, but I didn't get to know his personality because we only worked together on one film."

With the recent Mainland reports that claimed Ka Fai was Jacky Cheung Hok Yau's brother. Ka Fai joked that after further investigation they were brothers of different parents. Has his friends believed that to be true? He joked, "Many did because this joke has been accumulating for years. The foundation is very heavy. Everyone was very surprised; however I don't want to rely on 'Ah Gor', until now when I have performed a little I brought this up." Lau Ching Wan said that he just finished a film in Shanghai. As for Mrs. Heung and Chow Sing Chi's trouble, Ching Wan said that he did not know Mr. Chow. Because they have only worked together on television and no contact privately, he was unsure about what happened between them.
Posted by hktopten at 9:31 PM