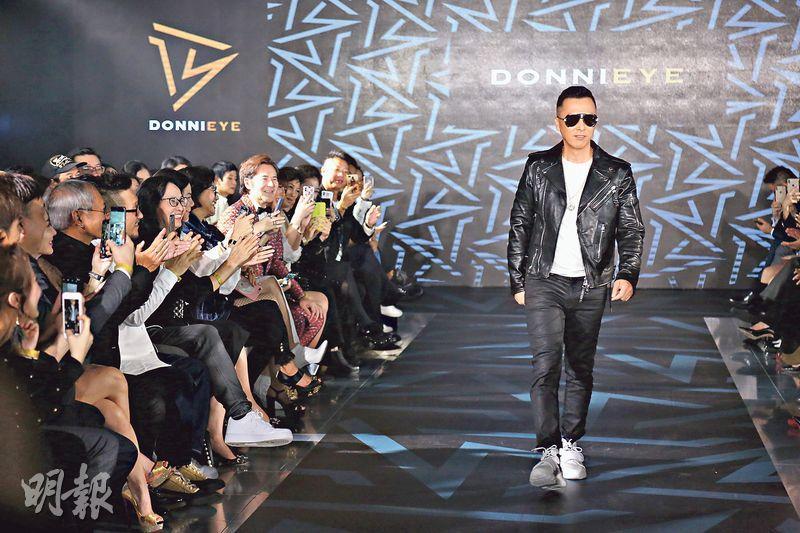 Donnie Yen Chi Tan's own eye wear brand DONNIEYE last night held a press conference. Many friends like Rosamund Kwan Chi Lam, Hacken Lee Hak Kun, Eva Huang Shengyi, Sandra Ng Kwan Yu attended. Lord Don not only designed his own glasses but also guest modeled. He said that modeling was not difficult at all because nothing was harder than making movies. Huang Shengyi came from Beijing to support Chi Tan. As for the sensitive subject of tax evasion, she stated, "We are law abiding people, with a lot of self control."

Speaking of the Yen Chi Tan, Wang Baoqiang, Simon Yam Tat Wa and Huang Shengyi starred ICEMAN 2 TIME TRAVELER (BING FUNG HUP 2 ji SI HUNG HUNG JEH)'s release after 4 years, Chi Tan stated that he already forgot about this film after such a long time. No one even notified him about the release. Would he promote the film? Chi Tan said, "Too late, I will have to work on a movie in New Zealand. I won't have time to promote." Chi Tan said that too many decision makers were behind the ICEMAN sequel, even he did not know who had the final say. "I don't get to worry about the box office because I am not the producer. That's why I always insist on producing my own movies, for which I get a lot of control. Now a movie too often has too many organizations involved, with too many decision makers." Huang Shengyi who has not appeared in Hong Kong for a long time came to support him. Chi Tan said that last night he invited many friends. Those who could not attend like Wang Baoqiang called to congratulate him. He hoped guests would attend the event like a party.

Speaking of the earlier tax evasion storm, Huang Shengyi and her husband were rumored to be the target worth over 700 million. She denied tax evasion and said, "We are law abiding people. We won't do anything illegal, we have a lot of self disciple." She even said that the new regulation on salary limit would not affect her.
Posted by hktopten at 4:07 AM