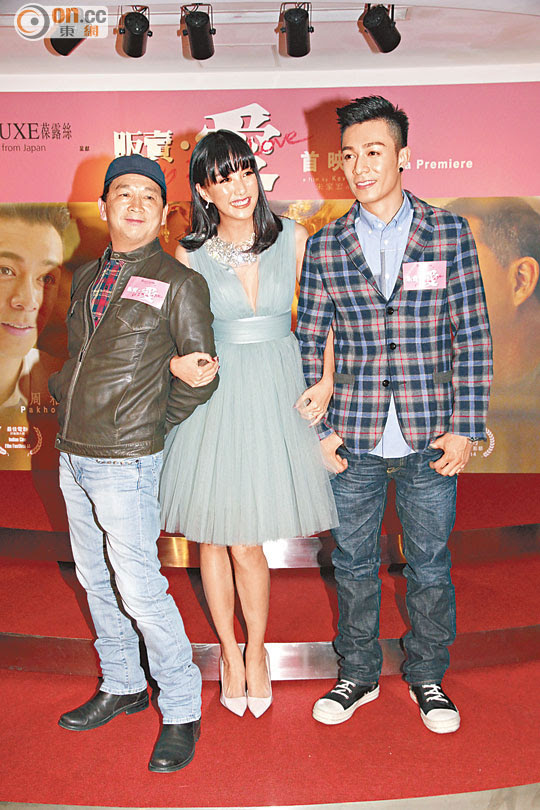 Rose Chan Ka Wun, Pakho Chau and Liu Kai Chi's film I SELL LOVE (FAN MAI OI) two nights ago held its premiere. Chan Ka Wun played an assisted dating girl and had a daring performance. She gave her first on screen kiss to Pakho and Uncle Chi also got intimate with a kiss on the cheek and a hug. She revealed that for her kiss scene with Pakho, she was nervous that she was trembling. Pakho made fun of her and asked if it was her first kiss scene? The film had many advanced screenings. Chan Ka Wun said, "In the past all I did was fight in films, I had no lines. This time I had many emotional scenes and lines. Viewers after watching all said that I was very refreshing."

Uncle Chi said that it was his first bed scene with Chan Ka Wun, admitting that it was awkward because it felt like father and daughter. He joked that the director did not benefit him with a kiss scene. As for both of his HKTV series THE ELECTION and THE BORDERLINE were popular and had great word of mouth, Uncle Chi happily said that season 2 now has a chance. I felt that the production still had room for improvement. He hoped boss Ricky Wong Wai Kay will increase the production budget of each episode to over HK$ 1 million, with raises to go along with that.

Aside from that film, Pakho in the future will have two more film releases. He hoped to be able store collect enough on screen performance experience to fulfill his directing dream in a few years. He already had several scripts in his minds. "I am known for writing, I have no problem with screen writing." His first film as a director may be about his field of expertise of basketball. He will call in all his favors and ask his friends in the business to perform. Of course the best would be for Shawn Yue Man Lok to agree to help.
Posted by hktopten at 7:46 PM