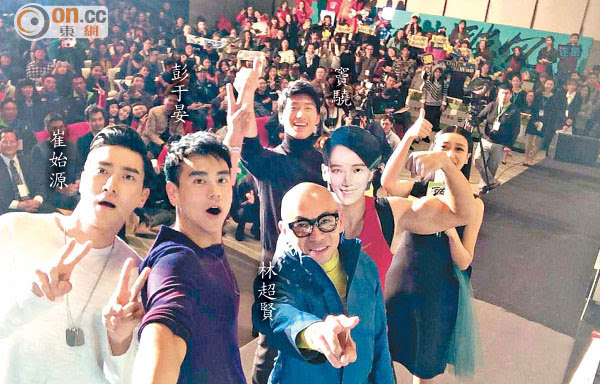 Lam Chiu Yin announced TO THE FORE will officially open in the summer of 2015. Yesterday the trailer was shown. The team shot on six locations around the world. The actors rode over 100,000 kilometers; the story not only depicted the cyclists' hot blooded dreams but also displayed their inner emotional worlds of friendship and love. Lam Chiu Yin said that the new film not only had a hot blooded story but also fierce action and would bring awe to the visual sense and experience.

The team went to Taiwan, Hong Kong, Italy, Korea, Tengger Desert of Inner Mongolia, and Shanghai to shoot. The actors even rode over 100,000 kilometers, two and a half times around the world. Peng Yu-Yen joked, "This film production fulfilled my dream of traveling around the world!" In order to play the cyclist well, the leads accepted strict training for professional cycling teams. Peng Yu-Yen pointed out that he was the "experience type", he trained and lived with these cyclists to be able to truly understand their races and inner world. Only by becoming them would he be able to perform the most realistic condition. Choi Si-Won only discovered at training that hobby and professional levels had a huge difference. To be a top qualifying cyclist, the best physical condition and will power were necessary. Dou Xiao also said, "We have to work with real professional cyclists, under high speed riding conditions we even had to cast off the relay. Actually it was rather dangerous and also challenged the skills a lot. However after a few crashes I finally was able to do it. Although I was injured, I felt it was worth it. It was very fun and pleasant." Peng Yu-Yen also said that originally he thought cycling would be easier than fighting and martial arts, but actually it was even tougher. Because this time was a competition of speed, skills, endurance and will power, I truly was forced to a limit. However in the end the resulting display was very cool."
Posted by hktopten at 8:54 PM