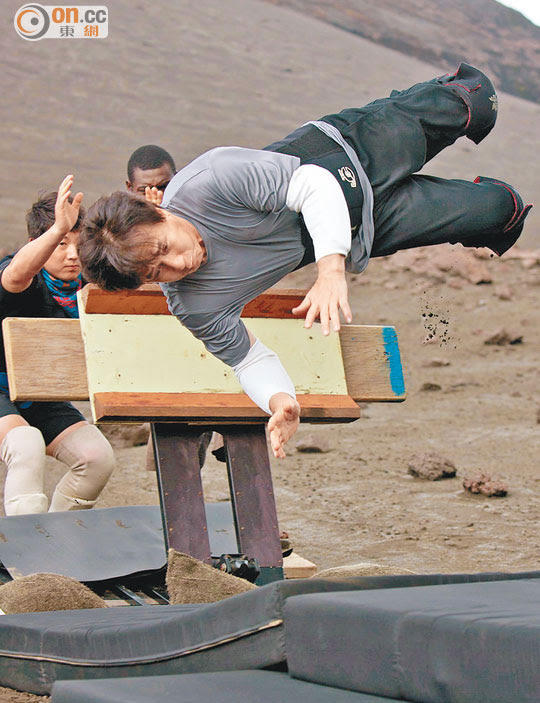 The Jackie Chan and Mainland star Fan Bingbing starred action film SKIPTRACE has had a series of accidents. Aside from last Wednesday's accidental drowning of cinematographer Chan Kwok Hung, Jackie Chan also had an accident two days before.

Jackie Chan was working on a scene in which he jumped from above, he slipped and his hip hit metal. Thus he cracked the seven rib on his right side. To keep up with the production schedule, Jackie Chan toughed the injury out despite years of injuries. He did not immediately see a doctor and the next day the condition improved slightly. By the third day it became very severe. When he sneezed he aggravated the injuries and he could not move from the pain. Overnight he went to see a orthopedist, then stayed at the hospital.

After his injuries, due to Chan Kwok Hung's accidental death he even said that his pain was no big deal and thus did not mention it to anyone. Yesterday Jackie Chan admitted that he was injured on the set. "It was several days ago, I was even at the hospital! Now I have to stabilize the injured area. It hurts a lot even when I sneeze. I try not to sneeze."

Jackie Chan said that this time he also aggravated an old foot injury. SKIP has shot in Inner Mongolia, Beijing and Hong Kong, luckily Jackie Chan has already completed the shoot and did not have to go overseas again. He could rest a little.
Posted by hktopten at 3:18 PM