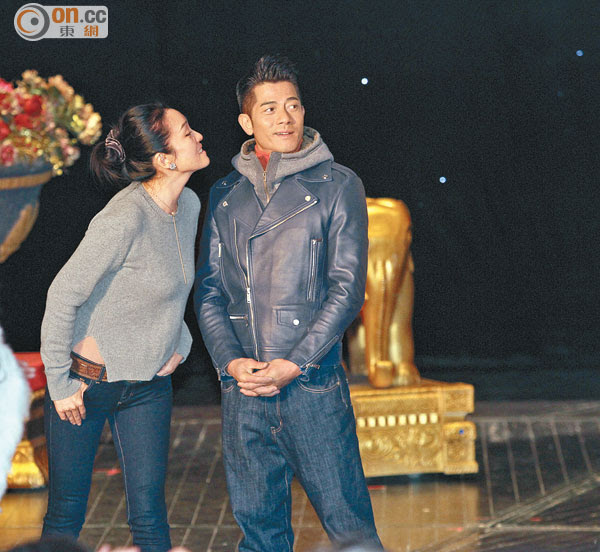 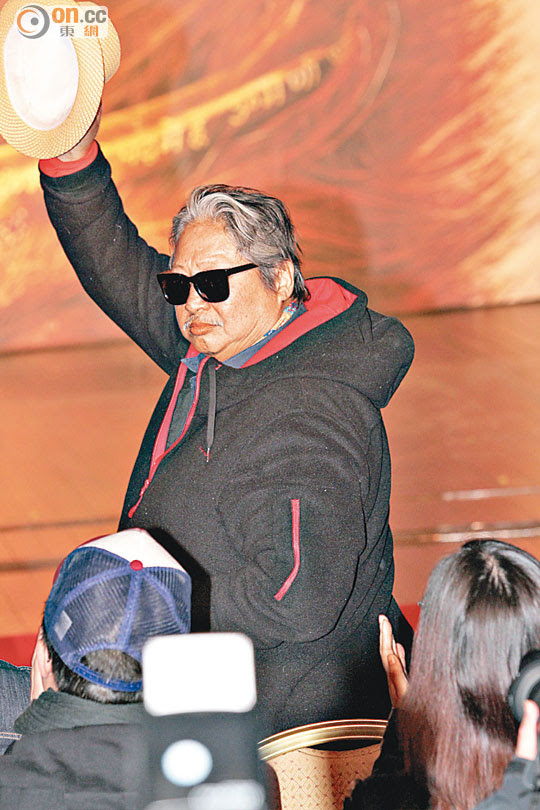 The film THE MONKEY KING 2 (SAI YAU GEI ji SUEN NG HUNG SAM DA BAK GWUT JING) yesterday held a global press conference in Wuxi. Actors Aaron Kwok Fu Sing, Gong Li, Feng Shaofeng, Xiao Shenyang, Law Chung Him and others attended. Yesterday Sing Sing was revealed to be meeting girls online. The reports did not seem to faze him, but he avoid the press and did not accept any interview.

Aside from the actors, Director Soi Cheang Po Shui, action director Sammo Hung Kam Bo and boss Alex Wong Hoi Fung attended as well. Around 400 media outlets covered the event. Yesterday a magazine report claimed that Sing Sing met a Japanese student who was studying in Hong Kong online and they have been dating for three months. Sing Sing even sent sweet messages and sexy photos to her. Sing Sing yesterday looked mischievous and seemed unfazed by rumors. He said that playing Sun Wukong this time will be the most difficult role in his acting career, but he was very happy to be able to use his over 30 years of dance experience and merged his stage performance into the film; he also said that normally he worked out. This time the costume required 7 hours to apply make up everyday, a dramatic scene was like a dance routine. After an entire day of shoot he felt like he performed three concerts. Thus he needed special training.

Best Actress Gong Li in the film had a lot of action, which was a huge challenge; she joked that she suggested to the director a title change to the White Bone Spirit Thrice Strikes Sun Wukong, because the White Bone Spirit normally should be a very fragile woman but when she fought she was very ferocious. She hoped that Sing Sing would show mercy. Sing Sing joked, "Fight!" Gong Li said that this role was different from her previous ones. If it would be like the past ones then they have failed. Thus this time had to be something that no one could imagine. Sing Sing was also happy to be able to work with Gong Li. When she visited the set earlier, she did not mind how dirty his hand was and shook it. However he joked that in the end he had to beat her to death.

Playing the venerable Tang Monk, Feng Shaofeng during the shoot was rumored to be injured and in a coma. Yesterday when he got on the stage, other actors gave him a hand. When the press conference ended he had to sit in a wheel chair. Feng Shaofeng said that he was playing with the White Dragon horse he sprained his leg. After a few days he was better; he said that originally he wanted to appear as an idol on the stage, but his legs were a little numb. He was very touched that the brothers helped him to the stage.

Him Jai in the film play the Sand Monk. He pointed out that the costume did not have a lot of material, so it showed every and any muscle. He said that he was not the most honest Sand Monk but he was the coolest Sand Monk. After the press conference, Him Jai was asked if he and Sing Sing in the film would have a muscle flex off. He said that of course Sing Sing was better. His costume was also very cool.

Him Jai was rumored to have signed a 9 year contract extension with Filmko and took THE MONKEY KING for HK$ 3 million. He said that he has not signed a new contract. He was not at liberty to reveal how many years were left. As for the 3 million salary, he did not admit. He only said that he was very happy to receive this rate.

Playing Piggy, Xiao Shenyang said that he did not understand he was chosen for the role. However he stated that he would definitely be a different Piggy. "I don't have to gain weight, special effect make up is enough. (Is it because you are great with the ladies, so he has been invited to play Piggy?) Take a look at me, I can't be that great with the ladies. So my acting probably caught their eyes."

As for the film's 3 billion RMB box office target, director Cheang Po Shui said, "There is some basic pressure, but I would treat it normally. The last film was a Heavenly Palace story, this story will take place on Earth. It will have even more creative space!"
Posted by hktopten at 3:39 PM