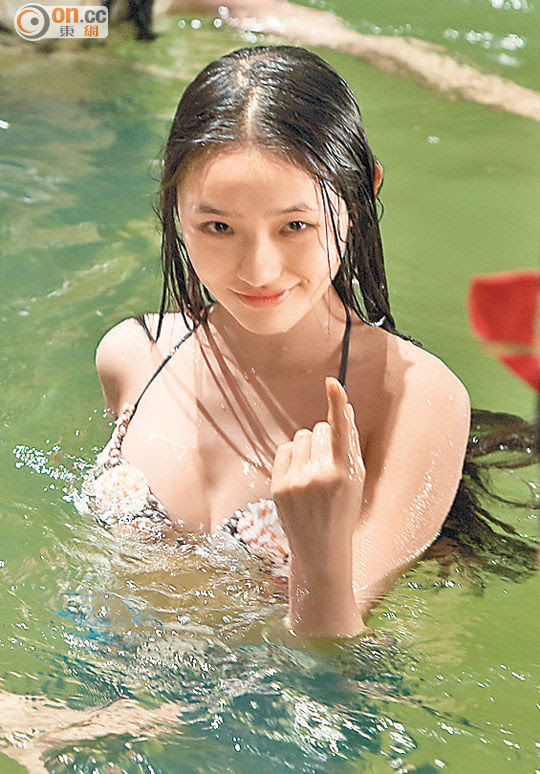 Stephen Chow Sing Chi who likes to help new comers has always had his eyes for girls with fresh looks. Cecilia Cheung Pak Chi, Eva Huang Shengyi and Kitty Zhang Yuqi were all examples when they started and thus Sing Yeh chose them to be leads in his films! Earlier Sing Yeh for his modern romance science fiction film MERMAID (MEI YUN YU) held an actor recruitments. After many rounds of selection the lead actress choice was finally revealed, the 80 year Zhejiang girl Jelly Lin Yun! At a glance she looked like a mix between Big S (Barbie Hsu) and Shu Qi. With her bashful personality that shies away from the spotlight, no wonder she became the new "Sing Girl".

Lately Lin Yun has already begun work on MERMAID and Sing Yeh has been by her side to attentively instruct. In her first film Lin Yun had many challenges. Playing a mermaid she had to spend a lot of time in the only 10 degree Celsius water. She also had to get wet, flip and jump in the water. During the performance Lin Yun had no complaint, but once she got out of the water she could not help but make cute expressions like breathing and pouting. In another scene she was hung in mid air on wires, she had a smile without any sign of fear. She wore blue pants and shoes for the special effect mermaid tail. Then she worked a simple phone call scene, and Sing Yeh still attentively instructed her. He even demonstrated for her. Lin Yun and the former Sing Girl Zhang Yuqi played villain will have even more scenes together. Reportedly MERMAID has already begun production in October and will wrap before the Lunar New Year for a 2016 Lunar New Year release.

MERMAID lead actress has had many rumors, Zhang Zilin, "Milk Tea Girl" Zhang Zetian and Liu Xiang's wife Ge Tian were linked to the role but in the end Lin Yun without any acting experience won out. Actually Lin Yun was popular online, in the top three among the 120,000 participants. Later she was able to successfully move into the rounds of 43 and 13.

During the round of 13 training period, many participants tried to steal the spotlight when they saw the press. Some even tried doing so in a hardcore manner, yet Lin Yun stood to the side in a low key manner. When she answered she gave people the impression of needing protection. Later Lin Yun received praised in various challenges and got into the final 7. Lin Yun during the contest revealed that her friends recommended her to compete. At the time she was a print model. She has always admired Sing Yeh and decided to try something new.
Posted by hktopten at 12:43 PM