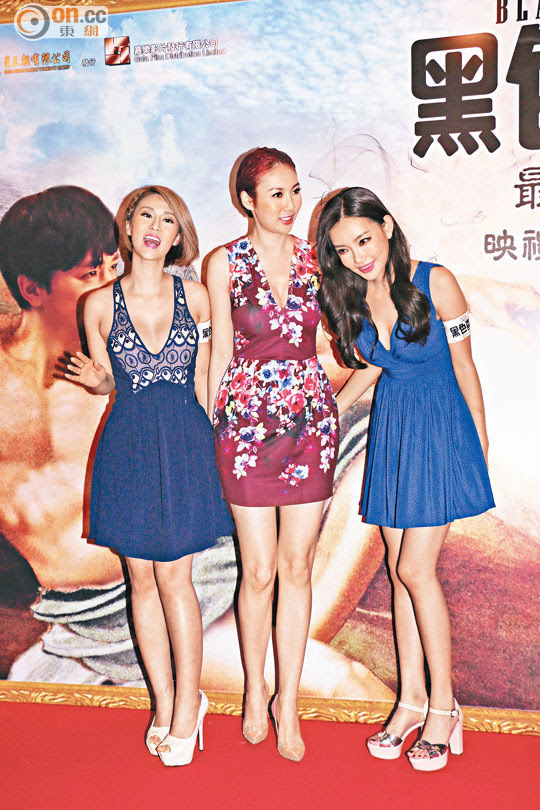 Wong Cho Nam two nights ago attended his new film BLACK COMEDY (HAK SIK HEI KET)'s premiere. Female stars Kimmy Tong Fei, Jacquelin Chong Si Man and Barbie Liu (Ha Wai Yu) attended. Elaine Lok Yi Ling also showed support with a group of TVB artists like Christine Kuo; Cho Nam stated that he did not look at any of the female star, as he only had eyes for his girlfriend Leanne Li Yanan. His eyes would never leave her. He said, "I didn't bring my girlfriend to the premiere to spare her from getting jealous. I am really afraid that she would grab my ear when she saw me with other girls! I am also afraid that when she saw the poster she would wonder about what kind of movies I was making. Actually I have been very nice, (Chapman) To Man Chak was responsible for all the sex and foul language in the film."

Tong Fei successfully stole the spotlight from Ha Wai Yu and Chong Si Man. When asked if she was wearing anything underneath, she played coy. "Hong Kong reporters are amazing, so I would pay attention to what I wear. Whatever you see it is." Last time her co-star was Nicholas Tse Ting Fung, how did this time feel with Cho Nam? She praised that both were handsome and even kissed up to Cho Nam, saying that the box office would depend on him. She hoped that the film would make 1 billion yuan.
Posted by hktopten at 2:05 PM