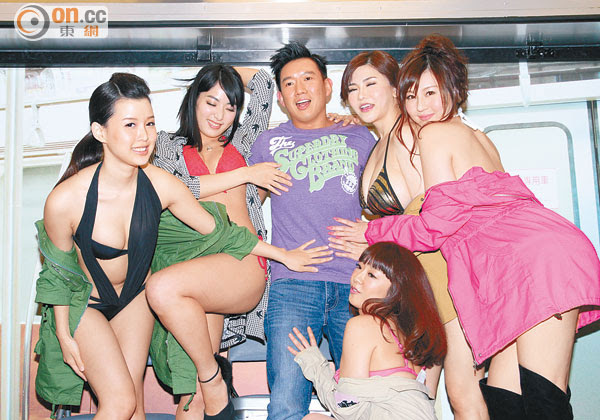 Chapman To Man Chak yesterday with Japanese adult video actresses Yume Kana, Tsukasa Aoi, Anri Okita, Yui Tatsumi and Maiko Yuuki promoted their upcoming film release NAKED AMBITION 3D (3D HO CHING). The actresses removed their clothing to show off their bikini and surrounded Ah Jat for photos. Although their move was daring, Ah Jat said that it was child's play. Even if the actresses assaulted him in front of everyone he would not mind, he joked that if he turned them down he would be insulting them. Thus he had to enthusiastically represent Hong Kong and welcome them. Ah Jat said that this entire process was considered more conservative than the actual shoot. Maiko Yuuki admitted that she constantly touched Ah Jat and even called him "Tokyo Tower". Anri Okita said that it was her first promotion in the city, but she felt excited instead of awkward. Ah Jat pointed out that his wife Krystal Tin Yui Nei was already the first viewers, Ah Tin's reaction was falling from the sofa to the floor laughing.

As for Anthony Wong Chau Sun's suddenly supportive post, did they settle their differences? He immediately became Louis Koo Tin Lok possessed and said, "About this Wong Chau Sun person I have no comment." Why did he pretend to be Goo Jai? He joked, "He has to play Xiamen Koo Tin Lok himself. Since he is this film's producer, how can I not impersonate him?"
Posted by hktopten at 2:15 PM