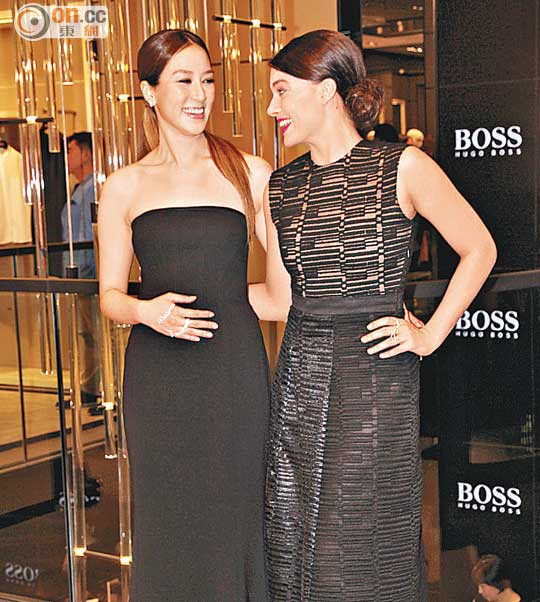 Hugo Boss last night held a opening ceremony for its Central flagship store. THE WOLF OF WALL STREET's Margot Robbie, Chow Yun Fat and his wife Jasmine Tan, Cathy Lee Tsui Chi Kei were the ribbon cutting guests. Lately Fat Gor dropped 40 pounds in a year, which made Fat Soh worry as she asked him to see a doctor. Last night he indeed looked very thin. Fat Soh stated that she told him to stop. Fat Gor remained humorous. "I lost 30 pounds, down to skin and bones; but when I am thinner I walk faster." He also joked that he drank from the fountain of youth. Lee Tsui Chi Kei took the chance to take a photo with Fat Gor, but she joked that her dress made her look like she was naked in the photo!

Fat Gor was asked if he saw THE WOLF OF WALL STREET. He curiously asked, "No, why do you ask? (The lead actress is next to you?) I didn't recognize her, she is much prettier." He admitted that he was much thinner. Some said that he seemed to have returned to his youth. He joked, "I went to Wui Chun Tong on Stanley Street and drank some rejuvenation medicine." He clarified that he did not lose 40 pounds as reported. He said, "I only lost 30 pounds. I started losing them while working on FROM VEGAS TO MACAU (DOH SING FUNG WON). Now it has been 9 months. (Will you keep slimming down?) I am left with skin and bones, I won't get thinner. Actually I really like to eat, I can really eat,rice, fish, meat and other normal food. Normally I don't eat at night, twice during the day. In the afternoon I have fruit, potato, a lighter fare. However with 30 pounds less I feel very comfortable, I walk faster too. Every week I go hiking, occasionally I get a back massage."

Lately he has been working on Johnnie To Kei Fung's new film DESIGN FOR LIVING (WA LAI SEUNG BAN JOOK). Will he work with Nicholas Tse Ting Fung again? Fat Gor said, "Ting Fung is very picky, it will depend on his schedule and whether he likes the script. Earlier Ting Fung through Fat Soh asked me to be on his food program, but our schedules didn't match. (Have you tried Ting Fung's cooking?) During the shoot I only see him eat boiled egg, like a god he doesn't eat." Fat Soh stated that Fat Gor was too thin, "It's enough! He has to stop. (Isn't he more handsome thinner?) He has always been handsome."
Posted by hktopten at 2:04 PM