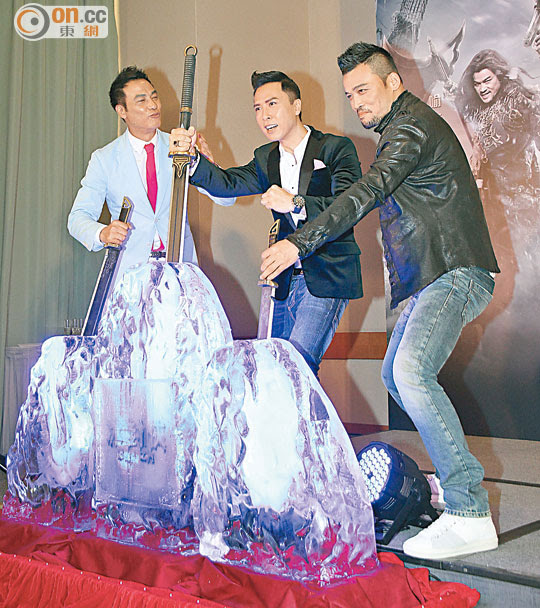 Yesterday the "Strongest in the Universe" Donnie Yen Chi Tan and his disciple Yu Kang, Simon Yam Tat Wa attended the film THE ICEMAN 3D (3D BING FUNG HUP)'s Hong Kong Entertainment Expo press conference. The trio pulled swords out of ice to signify the film's box office success. Yen Chi Tan earlier with his film THE MONKEY KING (DAI LAU TIN GUNG) broke the 1 billion Mainland box office record. He said that this time he would not give himself any pressure because success depended on many elements. To chase numbers would be very difficult. He also felt that numbers should not be used to determine a film's fate, the most important was for the audience to like it. Yen Chi Tan pointed out that he recommended his disciple of 11 years, Yu Kang, for this film and praised his disciple for his agility and kung fu. He hoped to have brought new life to the film industry without successors. He said, "Even I am no match for him." Chi Tan reportedly took 30 million to star in IP MAN 3. He said that he will talk about that later at the press conference, hinting that he took the role already.
Posted by hktopten at 2:17 PM