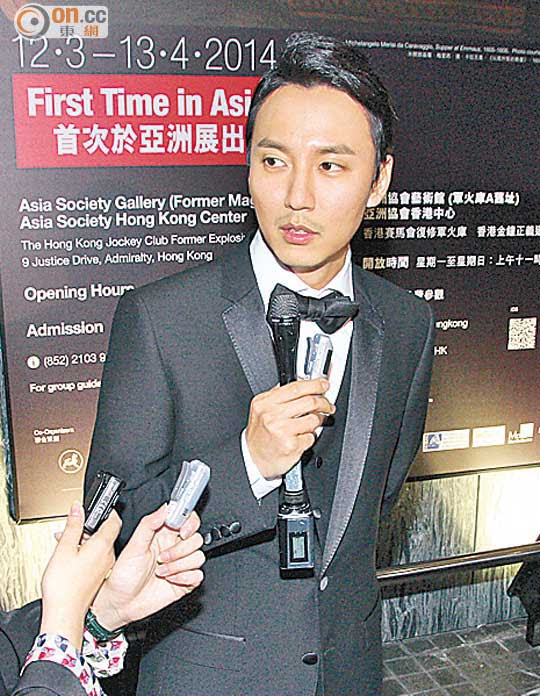 Ka Ling was one of the Asian Film Award jury members. Lately she have watched many films and already voted. Speaking of her husband Tony Leung Chiu Wai's nomination with THE GRANDMASTER (YUT DOI JUNG SI), Ka Ling said,"I would be fair and objective, normally when I watch movies with Wai Jai I still wouldn't flatter him." As for how Wai Jai performed in THE GRANDMASTER, Ka Ling said that she did not need to talk about it. She had confidence in Wai Jai. Nowadays even without an award he would not be accused of not knowing how to act, but the award would also be able to encourage the actor. Speaking of Wai Jai running into strong competition from Lee Kang-Sheng, Ka Ling said, "Lee Kang-Sheng indeed performed very well, his character was very hard to play."

Yen Chi Tan felt that his years of hard work has not gone to waste, but he would not celebrate. Would he challenge even more difficult roles? He said, "I do my best with every film. In recent years I have made many daring attempts with my acting, I will continue to break through myself." As a jury member he stressed that he would not play favorites with Hong Kong films, but if Hong Kong people won he of course would be happy.

Chiaki Kuriyama said that she really liked Hong Kong. This time she met many Hong Kong filmmakers and hoped to have more exchanges. She would like to a chance to make a Hong Kong film and try action films. Kim Nam-Gil in the future hoped to have a chance to work with Asian filmmakers. "It's the first time I come to Hong Kong, I feel Hong Kong has many hills and is very pretty. Its night scenery is even as beautiful as a gem." He said that he grew up watching Hong Kong films and admired Leung Chiu Wai and the late Leslie Cheung Kwok Wing. He hoped to have a chance to work with Wai Jai. Kim Nam-Gil revealed that he has received Chinese film offers and he was reading scripts. Would he study Putonghua to make Chinese films? He immediately said in Putonghua "No problem" and "sorry". Actually he studied Chinese in his university days, because he has not spoken it in awhile he was rusty.
Posted by hktopten at 2:29 PM