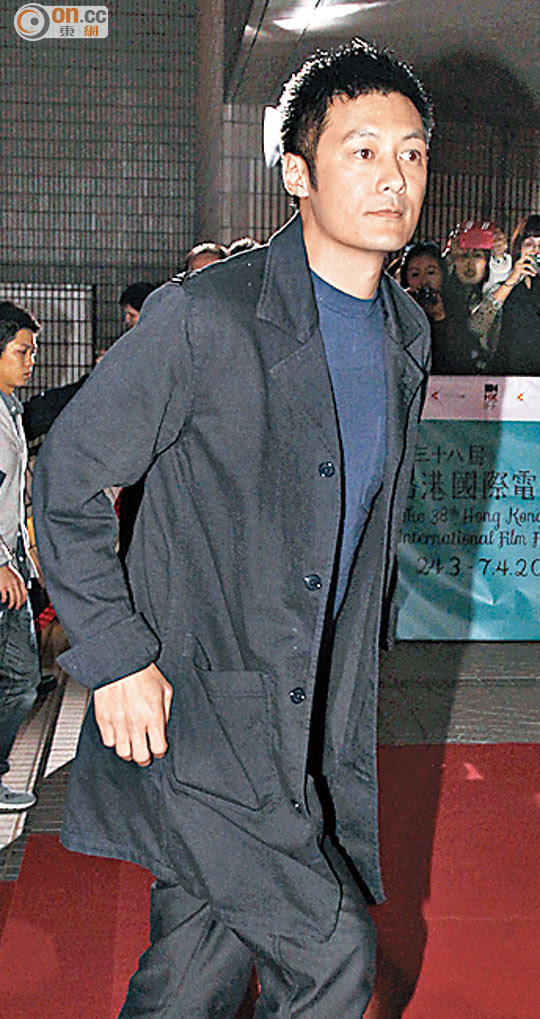 Gigi Leung Wing Kei, Louis Koo Tin Lok, Miriam Yeung Chin Wa and Pang Ho Cheung two nights ago attended the ABERDEEN (HEUNG GONG JAI) premiere at the Cultural Center. After the premiere, everyone celebrated at a party in a nearby restaurant. At the same time they surprised the 38th year old Gigi with a birthday party. Gigi could not be happier.

Leung Wing Kei turned 38 yesterday. Two nights ago after attending the ABERDEEN film premiere with the team, they went to a nearby restaurant for a party. Around midnight, the crew suddenly brought out a birthday cake to celebrate Gigi's birthday. At this time Gigi's husband Sergio appeared and surprised his wife. Gigi could not be happier. Everyone also roared for Sergio to kiss his wife Gigi. Sergio of course complied and Gigi cooperated. They kissed three times for reporters.

Two nights ago before the ABERDEEN premiere, Gigi and Goo Jai held their onscreen daughter's hands on the red carpet. With a stiff shoulder, Gigi said that her birthday wish was for good health and ABERDEEN to be a box office hit. Goo Jai jokingly asked if Gigi would have a Hong Kong Kid (sounds like ABERDEEN). She returned the favor and said, "Goo Jai should have one first, many girls are waiting for him to breed!" Goo Jai said that he failed, after 3 hours he still could not get a girl. Actually he was referring to the child actor in the film.

Yue Man Lok two nights ago attended the premiere in support. Recently he has been rumored to secretly visit Los Angeles with mixed heritage model Ase Wong. Lok Jai denied, "At this age if I am dating I would be honest, she is just a friend. If everyone I take a photo with is a girlfriend, I will soon be out of friends." He explained that he went on vacation in Los Angeles, Ase lived there so they met for dinner. He said, "I am not embarrassed, but I believe that few girls want to take a photo with me except for my Ma."

Yeung Chin Wa wore a blue dress to the ABERDEEN premiere, but after the premiere she changed in a black dress for the party. Speaking of being sexy, she joked, "I have never had any chest. If I want my chest to blow up, I have to have a second child to reach an unexpected quality." Her husband Real Ting Chi Ko also attended. Chin Wa said, "Hubby is already eating, he can't starve as his palms would be sweating and his limbs ice cold. He is the ICEMAN." She praised ABERDEEN's ending as touching. In the film Leung Wing Kei worked with a child actor. Actually Chin Wa has not worked with children after having a child. She said, "I have a lot of patience with children. I am a great mother, I can try to act with children."

Chrissie Chau Sau Na was super late to the premiere. At the party she explained, "I originally was the earlier to arrive, I didn't see anyone so I just sat somewhere nearby. When I got back everyone arrived, I never thought that I would turn being too early into too late." She will work with Julian Cheung Chi Lam on a new film. She said, "We will shoot on location overseas. The director asked us where we would want to go. I of course want to travel the world." She said that the film will be a romantic story, so she asked her friends what nations were the romantic. "Finally girls like small beautiful islands with sunshine and beaches."
Posted by hktopten at 1:44 PM