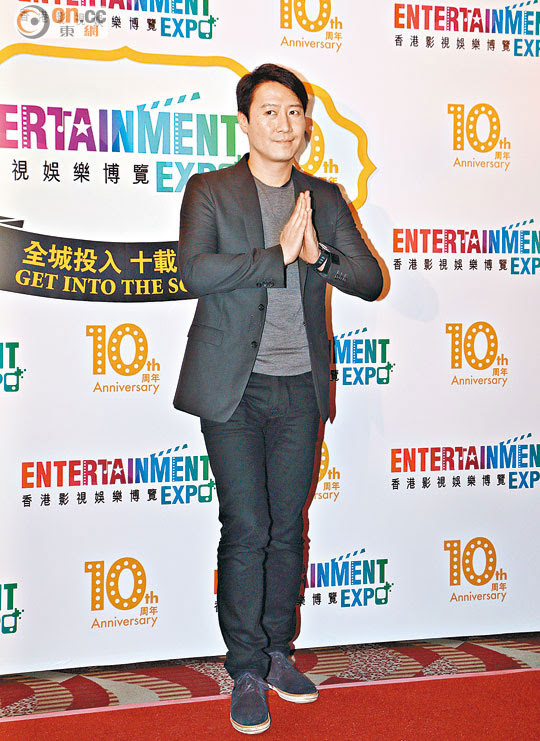 Ng Chun Yu hoped that the original team like Fala Chen would be able to star in the TRIUMPH IN THE SKIES film version, but the film would be a Media Asia and Shaw co-production. Fala Chen is no longer a TVB contract artist and might not perform. Chun Yu said, "During the series shoot, Fala already wasn't signed with TVB but TVB still made her the lead actress." Chun Yu did not know whether the film version would have the three of them fight over a girl.

Ekin and Sister Na's BREAK UP 100 CHI had a water scene. They both said that they were not embarrassed. Instead the cartoon underwear that the crew prepared for Sister Na ruined the romantic atmosphere, as everyone cracked up. Ekin pointed out that he did not inform his wife Yoyo Mung Ka Wai in advance because Mung Ka Wai was an actress and knew the job requirement. Sister Na felt that in the film she and Ekin dated for 8 years, intimate contact was normal so it was not awkward.

Cheung Ka Fai, Cheung Hok Yau and Chang Chen starred in HELIOS. Ka Fai joked that directors Longman Leung Lok Man and Sunny Luk Kim Ching swindled him. They agreed that he did not need to fight but in the end added two fight scenes for him. He joked that he had a fighting life. Instead playing a professor Hok Yau really wanted a fight scene. Was it because his salary was too high, no one could afford for him to play an action film? Hok Yau said, "Talking about salary in front of Ka Fai, mine wasn't even one tenth of his." Chang Chen had his first film car crash. He did not feel it was dangerous, instead he felt it was very exciting.

Leon Lai Ming will direct and star in WINE WAR. He pointed out that because he often had red wine with boss Lam Kin Ngok, he was inspired to make this film. He will also produce the 3D animation MONKEY KING RELOADED 3D, saying that he already had the idea 3 years ago.
Posted by hktopten at 2:18 PM