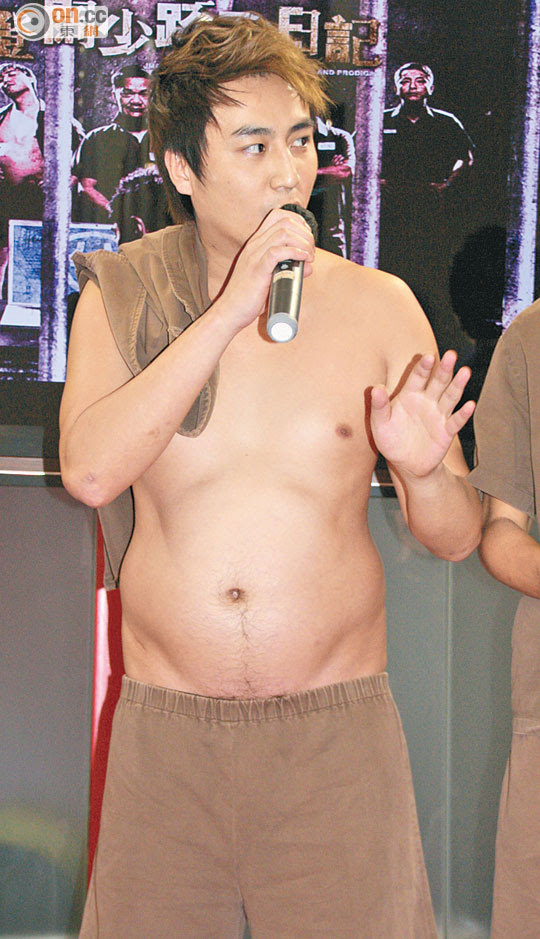 Justin Cheung Kin Sing, Gregory Wong Chung Hiu, Wong Kwong Leung, Deon Cheung Chung Chi and Babyjohn Choi Hong Yik yesterday attended their film PRISON DIARY OF A GOLDEN TOFF (GO DUNG FOOT SIU MAU GAM YUT GEI). The swollen Cheung Kin Sing suddenly removed his shirt and showed off the watermelon belly that he has been working hard on. When he turned around he accidentally flashed his crack, which was seriously hardcore. In a prison uniform, Wong Kwong Leung even coordinated with his boss character and "tested the mic" in front of everyone. He jokingly cursed at reporters, "What the X are you shooting?" He instead asked the host what educational value the film had. "This film teaches people to go to prison? Is it a negative teaching material?" Later he also immediately cut Wong Chung Hi's hair personally, Wong's eyes widen as he beg for mercy.

Later, Cheung Kin Sing said that for the film he had to gain 32 pounds to 180 pounds in three months. However GO will start production at the end of April. The director asked him to gain weight until 200 pounds. As the hunk turned fat, was meeting girls hard? He said, "How can I? Now I don't even dare to look into a mirror, I don't dare to go out. As soon as I do I burn up calories! For films like this once is enough. (What about the salary?) We haven't discussed that yet." Has he considered how he would lose the weight later? Cheung Kin Sing said, "Ah Yat (boss Stephen Shiu Jr.) plans to make DUE WEST 2: OUR SEX VACATION (YUT LO HEUNG SAI 2 THAI SAI), so I will have to drop to 130 pounds in 3 to 4 months!"

Ho Ka Kui in the film played a prisoner again. Known for PRISON ON FIRE (GAM YUK FUNG WON), he said that he would appear with his classic "villain" look. Since 2000 he has been performing in the Mainland and "yelling" at the audience. He quickly made 20 to 30 million RMB and said that this time he took the role purely out of interest.
Posted by hktopten at 5:27 PM