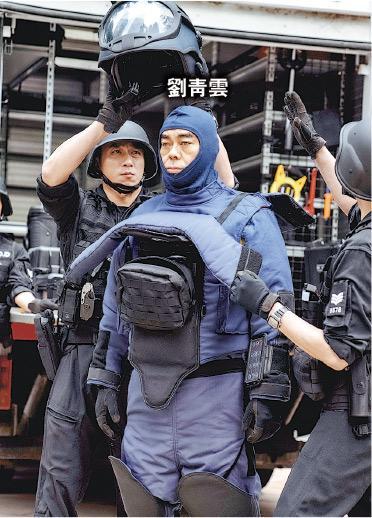 The Andy Lau Tak Wa produced and starred SHOCK WAVE 2 (CHAK DAN JUEN GA 2) will open at the end of this year. Sean Lau Ching Wan in the film played a "bomb disposal expert" chief inspector. During the production, he often had to wear the 70 pound bomb disposal gear. On the first day of work, Ching Wan and Lau Tak Wa had to work on a "bomb removal" scene. In "full gear" Lau Chung Wan looked hoeric in front of the camera, but after the shot he removed his helmet and joked that he was a little dizzy from the heat and said, "the job isn't easy."

In addition, Ching Wan and Lau Tak Wa have not worked together for 18 years but they are full of chemistry. Off camera they chatted and joked, often discussing beauty, cars and other topics. Lau Ching Wan said, "We have many different subjects, but we talk the most about the plot."
Posted by hktopten at 7:09 PM