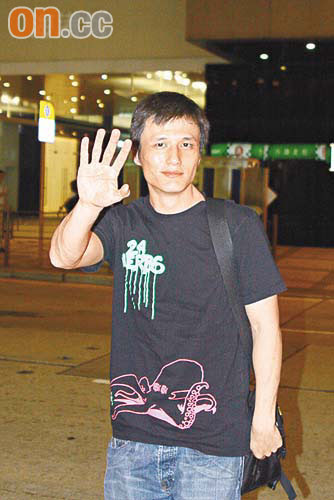 Two nights ago Aaron Kwok Fu Sing at a Tsim Sha Tsui bar worked on his new film CHUEN SING GAI BEI (CITY WIDE ALERT). Before his vehicle even stopped upon his arrival, suddenly four fire engines blazed in. Sing Sing was surprised to see all the firefighters and thought the bar was on fire. Later he learned that it was a bank false alarm. Sing Sing joked that it was a good omen and hoped that EMPIRE OF SILVER, MURDERER and the new film in production would have box office success.

Other artists included Yuen Wah, Terence Yin (Wan Chi Wai) and Square's James. Playing a cop Wong Chi Yin arrived last. Sing Sing expressed that this year he only finished his first film in June and hoped to be able to make more good films in the second half of the year. With the recent television broadcast of his films like THE DETECTIVE (C+ JING TAM), many friends praised his outstanding acting and the screenplay and asked him to keep making good films.

Yuen Wah in the film played Sing Sing's guardian. Two nights ago at the bar he did not need to fight. In the film Yuen Wah and Sing Sing's father were like brothers. After Sing Sing's father was set up, Yuen Wah secretly took up the duty of protecting Sing Sing and would have a series of fights. Although now Hong Kong film lost its former glory, Yuen Wah felt fortunate that he was able to work in Hong Kong and the Mainland. He already made some films in half a year but they have not been released yet. He would like the Hong Kong film industry to recover soon so jobs would just keep on coming.
Posted by hktopten at 7:58 AM