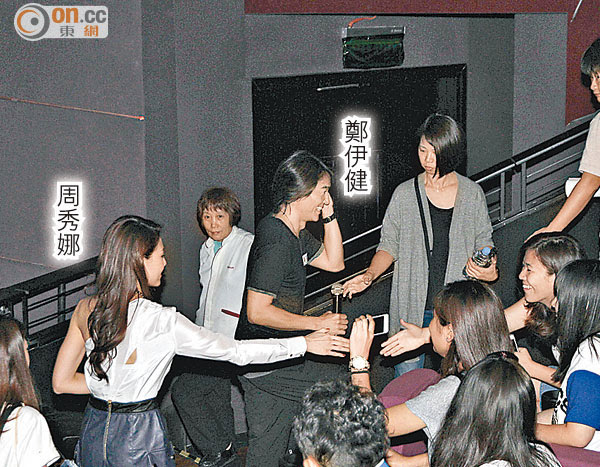 Dior Cheng Yi Kin and Chrissie Chau Sau Na two nights ago appeared at a cinema for a BREAK UP 100 (FUN SAU 100 CHI) audience appreciation events. Although Ekin was married, his big kid image was still deeply remembered. Two nights ago female viewers two mentioned that Ekin had to give his wife Yoyo Mung Ka Wai a sense of security, which made him feel awkward right away.

Later, Ekin was asked if he felt very awkward. He said that he had to learn to grow up, but he felt that if he was unsafe, many were even more unsafe. Did he feel that giving his wife a sense of security was the most important? Ekin said of course, he might have more news about his romance before and got everyone's attention, but in everyone's growth, breaking up and making up were inevitable. Sister Na said on his behalf that perhaps Ekin's performance was too good and too convincing.

In addition, during their earlier Mainland promotion, Ekin said that when he promoted in Foshan someone called him "garbage". He gave Sister Na a puzzled look but felt that the person had no reason to call him garbage with a smile. Sister Na said that at the time she stood in the back and hard someone very loudly screamed "garbage". She immediately jumped away a little. Later she realized that he was saying "male god". Ekin immediately said, "Because Sister Na was a 'goddess', so he called me 'god'."

Did Sister Na felt that Ekin was a 'god'? She joked that god and garbage was different by a thread. Before she knew Ekin she felt that he was a god, very cool, more handsome in person than on camera. Yet after the shoot the cool impression was gone. Perhaps the story was too realistic. Earlier they revealed that they were interested in opening a restaurant. Sister Na said that if the film opened big then they would open a restaurant and a sequel.
Posted by hktopten at 12:20 PM