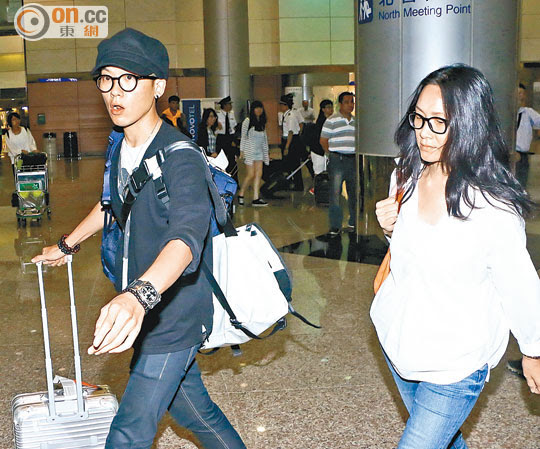 Ko Chen-Tung remained under detention on drug charges in Beijing. According to Taiwan media reports, Taipei District Prosecutors Office has already joined the Ko Chen-Tung drug investigation. The soonest he is expected to return to Taiwan would be on the 28th. When Ko Chen-Tung arrives at the Taoyuan airport, the Taiwan police is expected to arrest him for further investigation. If confirmed that he has used marijuana, according to the law he could face three years in prison and rehab.

Having visited Ko Chen-Tung in Beijing earlier, Papa Ko two nights ago returned to Taiwan. Papa Ko said that he absolutely would not blame Jaycee Chan (Fong Cho Ming). He said, "A friend is a friend, there is no need to say who is a bad influence on who. A friend is for life."

Has Jackie Chan approached them? He declined to comment. Ko Chen-Tung's parents were rumored to first have to assist the Taiwan police with the investigation before returning to Taiwan, they hoped that when Ko Chen-Tung entered Taiwan he would not be taken away in handcuffs.

Papa Ko yesterday morning around 4AM arrived in Taiwan, many media members have already been waiting at the airport. Papa Ko thanked everyone for their concern. He pointed out that Ko Chen-Tung was in great condition currently and admitted that he has been a poor father. His son now is accepting the punishments that he deserves. As for Ko Chen-Tung's impending Taiwan prosecution investigation, Papa Ko could not help but frown, and did not know how to respond. He only thanked the media for waiting and quickly left.
Posted by hktopten at 9:40 AM