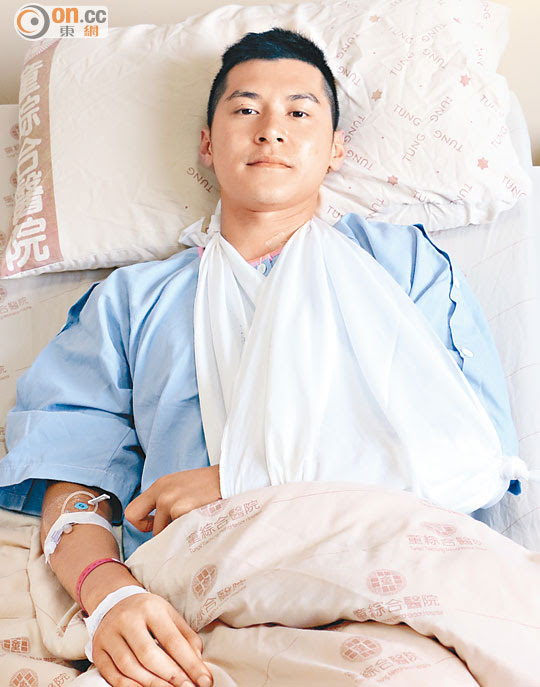 Carlos Chan Ka Lok earlier while working on a cycling scene in Taiwan for the film TO THE FORE (POR FUNG) was injured in an accident and was treated at the hospital. His left shoulder was broken and fragments even hit some of the nerves. Two nights ago the doctor immediately operated. After several hours in surgery, he felt sick because the anesthesia has not completely dissipated. Luckily after a night of rest, yesterday morning his condition has improved and he has settled down. The doctor said that the surgery was very successful as he checked the wound, but he found that the left shoulder suffered severe bruising near the back. Now he is treated with artificial skin. Because the doctor placed a piece of metal on his left shoulder, the wound still hurt a lot.

Emperor Motion Pictures artist department director Angelina yesterday rushed to the hospital to visit and breathed a sigh of relief when she saw Ka Lok's mental condition. She said that Ka Lok's anesthesia has worn off. He was in good spirits and could even go to the bathroom on his own. He also learned to ask nurses for breakfast and had good appetite. He even flirted with the nurses.

When Ka Lok learned about everyone's concern he broke down as he felt that he disappointed the people who supported him. Aside from worrying about his mother and grandmother who was scared to tears, he was also very concerned about hindering the filming progress. "This month I definitely can't ride." Director Dante Lam Chiu Yin revealed that he valued Ka Lok's effort and hard work, for now he would not change the script. "A complete recovery would take half a year, before that he could do some simple exercises. We will be shooting in Hong Kong later, I will try to use a double for all the dangerous scenes." When another visitor Andrew Lin Hoi suggested getting Ka Lok again for the sequel, he said that he has spoken with the boss. "We would definitely consider a sequel, but he is very worried and tells me to keep persisting."

Many of his co-stars like Shawn Dou Xiao, Ouyang Nana, Lin Hoi and Kevin Chu Kam Yin visited. Eddie Peng Yu-Yen even brought a fruit basket with him. He not only praised Ka Lok for his effort but also expressed regret. "As an actor, you of course that your effort will be seen!" However he also remembered to give positive energy and hoped Ka Lok would think positively. During this break he could do more stuff that he was interested in like creating music and reading.
Posted by hktopten at 12:25 PM