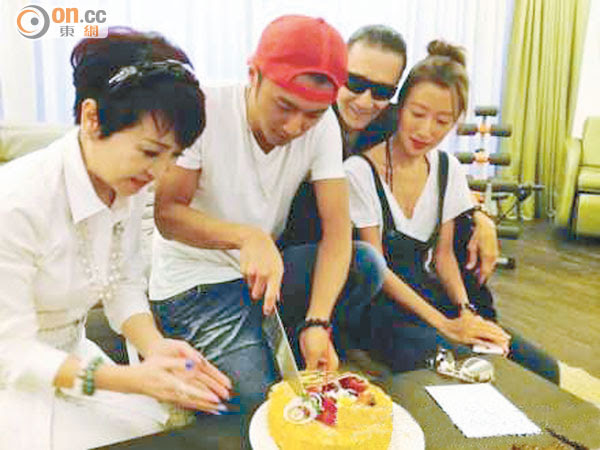 The Nicholas Tse Ting Fung and Gao Yuanyuan starred BUT ALWAYS (YUT SUN YUT SAI) last night held its Hong Kong premiere. Guests included Carlos Chan Ka Lok, Michelle Wai Si Nga, Marie Zhuge and Kathy Yuen (Tong Yi). Ting Fung in the past dozen days or so have been promoting all over and just returned from Chengdu. Later he will have to continue his promotional journey. Was he confident about the box office for his first romantic film? He said that he never thought about the box office, he only did his own part. Yet if the box office would be good would he never make another action film? He said, "This one is even harder than fighting, I think I wouldn't!"

With Mid Autumn on the way, Ting Fung due to work would not be able to be with his children. Yet earlier on his birthday he saw them. Did they give him any present? He said no present because they knew that was not Papa's style. As for cutting his cake with a cleaver, he joked that he just happened to be in the kitchen. Speaking of the new comer Alice Li (Luo Si) being involved in the "Fong Tung" drug incident, Ting Fung said that he never worried if she would affect the box office. However he has said what he wanted to say, and expressed his own concern. He did not want to say more.

Yuanyuan said that he would ask her soon to be husband Mark Chao to watch the film and was not afraid that he would be jealous since they were both professional actors. They did not need to explain either. Would she make less intimate scenes after becoming a wife? She said that she would not. Actors depended on the script. As for the impending Mid Autumn, she admitted that she did not prepare any moon cake for her future in laws but still thanked reporters for their reminder. She would spend the day with her family. Marie Zhuge after signing with Emperor has received many scripts. She said that she would like to work with Ting Fung and Sean Lau Ching Wan the most. In addition, Mani Fok Man Hei said that as far as she knew Alice Li was not involved in the case and she has made contact. However she would have to ask her Beijing colleagues for the details. Mani admitted that she would not hold a press conference to clarify.
Posted by hktopten at 10:57 PM