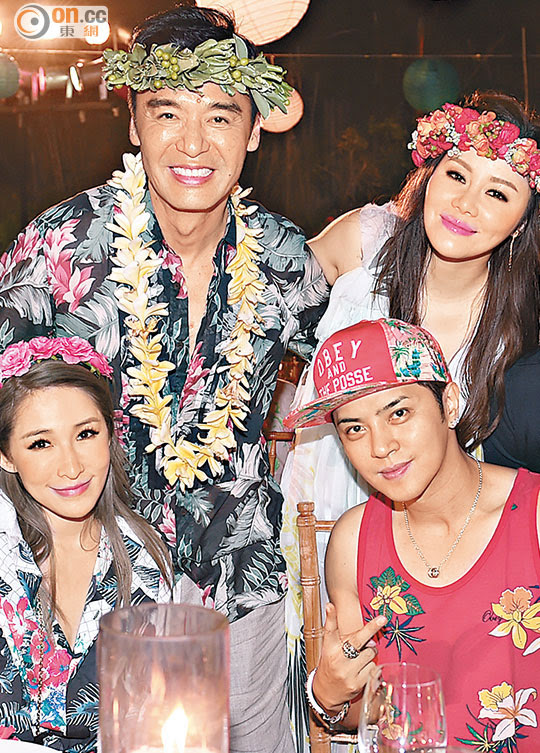 The 61st year old Kenny Bee (Chung Chun To) and girlfriend Fan Keung So Ching yesterday held a wedding at a six star hotel in Bali. Ah B held Fan Keung's hand as they walked down the aisle together. Gusts all broke mobile phones and photography equipment to capture the important moment of the new couple's wedding. One of the witnesses Rosamund Kwan Chi Lam got choked up during her speech, creating a chain reaction with Ah B, Fan Keung and the guests. Everyone were so moved that they all started crying.

After the couple said "I do", the bride could not stop smiling. All the guests cheered and sent their congratulations. Then they and along with oldest son Chung Ka Chun, Chung Ka Ching, Chung Yi and Chung Kwok posed for a family of six photo. Fan Keung described her emotions as "super touched". Ah B thanked family and friends who came the long trip to congratulate them. Around 4PM Ah B stepped out of the hotel and gave away laisee to the media. Finally giving Fan Keung an official title, he said that his wife was in charge of the wedding. Originally he just wanted to take some photos, in the end they might as well organize a party.

Yesterday some reporters went to the outer perimeter of the hotel in an attempt to look into the wedding venue, but hotel security called the police and took them back to the police station. Ah B said that before he and the hotel signed a confidentiality agreement, the authorities might have been overly cautious. He said that the wedding was a happy event and hoped that everyone would be happy. He and his wife sincerely apologized to their media friends. Ah B also showed off his wedding ring and said that it was worth HK$68 million. He asked if the reporters believed him. Then he also said it was an Indonesian shield. He revealed that at the end of the year he will organize another wedding banquet in Hong Kong, then he rode the golf cart back to the hotel.

In addition, Ah B and a group of friends accepted spoke to electronic media. Eric Tsang Chi Wai first praised Ah B's big day for being very touching. He even revealed, "The rarest witness was Alan (Tam), but everything he said was wrong! I have never been to a wedding when as soon as the groom and the bride appeared everyone was already crying!" Ah B joked that it might have been the music. He sentimentally said, "This time wasn't just a wedding for us two, but for the entire family and clan! For example my daughter designed my wife's veil. Actually this wedding came from my daughter Chung Yi saying that her classmate all had their parents' wedding photos at their homes but she didn't. So we thought about it, then slowly planned it. Actually it was a very happy event, so I truly am very grateful. I am very grateful for all the friends who came to spend several days together. I truly am very happy."

Chi Wai also said that Nick Cheung Kai started a blessing per person for Ah B, which almost made him cry even worse. Ka Fai boasted that his blessing was both smart and simple. "I wish B Gor Gor and B Jeh Jeh's love to endure until Earth is destroyed!" Another witness of this wedding Alan clarified that he did not make any mistake. Jacky Cheung Hok Yau joked that it was because Alan spoke Putonghua! This wedding also had neither a groom nor a bride party. Instead it had many "star second generation" because the couple wanted to friendship of the adults to continue to the next generation; last night the couple again held a banquet at the hotel for the guests and brought a perfect end to the wedding.
Posted by hktopten at 12:31 PM