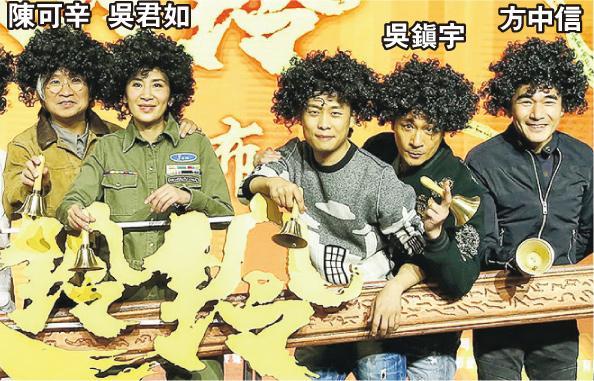 The Sandra Ng Kwan Yu directed and starred, husband Peter Chan Ho Sun produced, Francis Ng Chun Yu and Alex Fong Chung Shun starred 2017 film GOLDBUSTER (YIU LING LING) will open on December 29th. Yesterday they attended the film's press conference in Beijing. The event became the two actors' complaint party. They even joked that Kwan Yu swindled them. Kwan Yu said that for this new film she truly used every trick in the book, called in favors, sang and danced all for a laugh from the audience. The wo actors actually was very supportive of their friend Kwan Yu. On the stage they not only learned to dance but also put on a wig to play Kwan Yu's character in the film without any regard to their own god image!

Ng Kwan Yu directed for the first time and immediately expressed that she finally understood how tough her husband Chan Ho Sun's job was. "Changes were still being done to the film when I went to the airport last nigh, the Cantonese dubbing has been in process for several weeks." Producer Chan Ho Sun also helped. Kwan Yu said that in order to thank her husband, "When I got home I gave Mr. Chan special service, everyone can guess what it is hahahaha."

In addition she also felt that Ng Chun Yu and Fong Chung Shun made huge sacrifice for GOLDBUSTER. They immediately nodded in agreement and accused Kwan Yu of sweet talking them in the performance.

"Breakthrough is what Kwan Yu fooled me with." The always handsome Fong Chung Shun in GOLDBUSTER indeed had a major breakthrough because his character was balding and a lot of chest hair. Fong Chung Shun said, "At first I thought it was pretty interesting, but after working for 50 some nights and everyday wearing this balding cap I had a lot of regret." Ng Chun Yu said ha Kwan Yu tricked him to the set to fight night and day. Chun Yu said, "It is obviously a comedy, but actually it has so many chase and fight scenes!"

In the film music video Chun Yu even had to rap. This time for his friend Kwan Yu he really went all out. Everyone later put on a wig to dress like Kwan Yu's character in the film and danced.
Posted by hktopten at 2:15 PM