[2017.11.15] TERESA MO GETS SENTIMENTAL ABOUT PLAYING THE MOTHER OF AN AUTISTIC CHILD 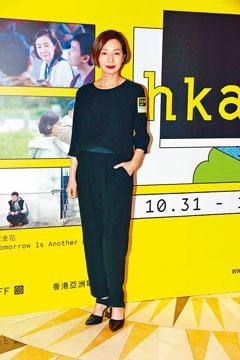 The Teresa Mo Shun Kwan starred film TOMORROW IS ANOTHER DAY (WONG GUM FA) two nights ago held a premiere. Friends Ada Choi Siu Fun, Monica Chan Fat Yung and Candy Yu On On attended. Mo Shun Kwan in the film played the mother of an autistic child. Her acting was challenged again. She admitted that before the performance she visited this type of families and deeply felt how noble the parents were, as it was not easy at all to care fo autistic children. Mo Mo also was grateful for both daughters growing up healthily. Even now they were still "stuck" to her and constantly missed home. They would even go on vacation with their parents when they had time. She said, "This is the advantage of having girls, actually sometimes I would see how rebellious some children would get. My husband and I would think whether we experienced that. Luckily our daughters were very nice!" Mo Mo also just took a new role and had to work in Japan during Christmas. She said that her daughters were planning to spend the holiday with her there.

Choi Siu Fun and Chan Fat Yung came to support Mo Mo. Ada revealed that earlier she took a television series role but due to script changes the production had to postpone its start until next year. She in turn had more vacation time to spend with her daughters. She planned to spend a white Christmas with them, now she would have to see whether her husband could take some time off. Ada also said that hre daughters were rather vain and sometimes would match her clothing for her. When we were out they would look at pretty things. Even if she did not like them they would ask her to get them for them, so they could wear them when they grew up.
Posted by hktopten at 5:23 AM