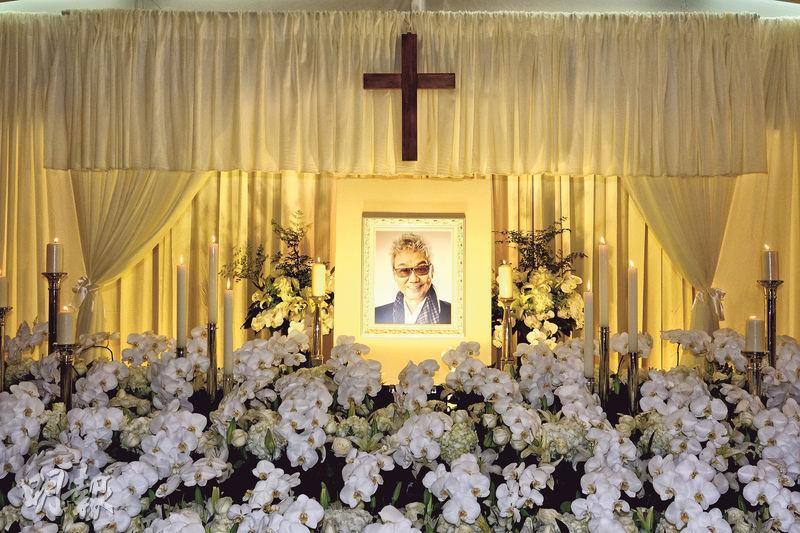 A viewing was held for the "Gold Label Manager" Willie Chan Chi Keung yesterday at the Hong Kong Funeral Parlor and a funeral will take place tonight at 10AM. The remains will be transported to the Cape Collinson Crematorium for cremation. Having repaired his relationship with Chan Chi Leung in recent years, Jackie Chan yesterday appeared at the parlor and would be a pall bearer for Willie as a final farewell.

Jackie Chan received the most attention. Around 6PM he and his son Fong Cho Ming arrived. The media flocked to Jackie Chan upon his arrival and caused a stir. With a medical mask Jackie Chan was teary eyed and saddened. He stopped by the stairway for reporters to take photos. Cho Ming rushed in amid the chaos.

Around 5PM, funeral committee members Chan Chi Ching and Solon So Chi Hung, John Shum Kin Fun spoke to the media. They revealed that god son Tsui Kwan Chun and Cheung Ngai Ga would speak at the funeral. A video would be shown. Speaking of funeral expenses, they revealed that Willie established a fund for his funeral and that Willie wanted his funeral to be like a party. He did not want anyone to be too sad. Although it was not completely achieved, drinks and colorful flower pins were provided for guests.

The recovered Chan Chi Chung and his wife Ho Chiu Yi came to pay their respect. Chi Chung looked fine. When asked about his health he gave the thumbs up. "I'm good! I'm good!"

Willie's hall yesterday was filled with flowers. Guests received programs with a lot of Willie's photos and many artists' eulogies. Jackie Chan who was the closest to Willie even had his own chapter. Jackie Chan's eulogy was, "Brother, I have been fortunate to walk the most beautiful part of the road of life with you. We experienced the bitterness and low of setbacks together, we also shared the joy and sweetness of success together. My greatest pain is unable to walk with you to the end, but in my heart would always be a place for you. May you live just as happily in another world."

Cheung Hok Yau wrote, "Actually the human heart is just like a jigsaw puzzle. It is put together piece by piece by people you love, value and care about. When one of the pieces is lost, it will never be whole again. A hole will forever remain. Willie has left! In my heart is a strong emptiness. I learned that Willie passed away in his sleep, I heard that this was the most comfortable way to bid farewell to the world. That's good, he wasn't brave. What I can do is just keep working hard on being myself, to be more outstanding than professional, for you to still be proud of me even in Heaven. Goodbye, my dearest father, brother and friend! I miss you!"

Fong Cho Ming wrote, "Godfather, I never thought you would go so stylishly. I didn't even get a chance to say goodbye. Your warm smile for everyone would keep appearing in my mind. Your crisp laughter at every occasion would keep ringing in my life from now on. May you in another world walk a path with beautiful fresh flowers as well." Around 8:40PM the funeral committee revealed to the media that Jackie Chan and Jaycee Chan have already left.
Posted by hktopten at 7:08 PM