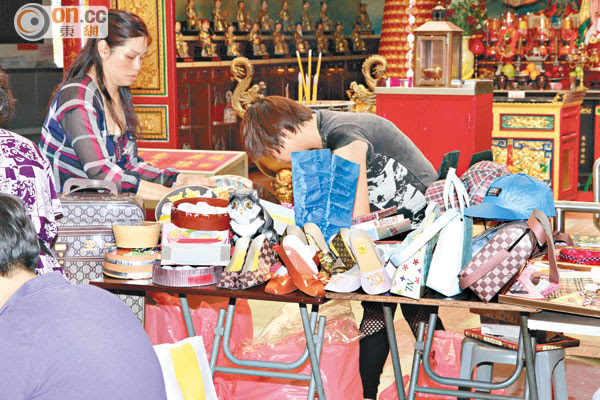 Yesterday would have been the late Heavenly Queen Anita Mui Yim Fong's 51st birthday. Over a dozen loyal fans gathered to pay respect to their idol. They not only folded offering but also performed other paper offering in the shape of brand name handbag, shoes, clothing and pet kittens. In front of her tablet was Sister Mui's favorite food like cake, beef chow fun, Hainan chicken and rice, curry, instant noodle cups, cola with the word "vermicelli" and other offerings. The fresh flower and fruit baskets had "Happy Birthday" in both Chinese and English. Fans obviously missed Sister Mui.

The Anita Mui International Fan Club president Ms. So wore the necklace and watch that Sister Mui has worn before from the auction and presented incense quietly. Later Sister Mui's manager Marianne Wong Man Wai came with orchid. She and Ms. So chatted a little then left. Ms. So said that every year on Sister Mui's birthday and passing anniversary memorial events would be held. She would attend as usual. Two nights ago she and her friends met, listened to Sister Mui's songs and recalled some of Sister Mui's past. Thus she did not sleep too well. She lamented, "In the brink of an eye it has already been 11 years, time truly has passed very fast." Yesterday after paying respect to Sister Mui, she and other fans went to the hotel to enjoy the buffet and catch up. On December 30, the anniversary of Sister Mui's passing, videos would be shown but they would not meet for dinner.

Ms. So also said that no plan has been made about another Sister Mui exhibit because last year at the 10th anniversary of Sister Mui's passing an auction and an exhibit just took place. She said, "whoever won the bid for the costumes would preserve them. When the time of need arrives they will be brought back for display. This necklace and watch are only worn on special occasions." Did she pay attention to Mother Mui and two nieces again suing for inheritance? Ms. So pointed out that she had very little contact with Mother Mui.