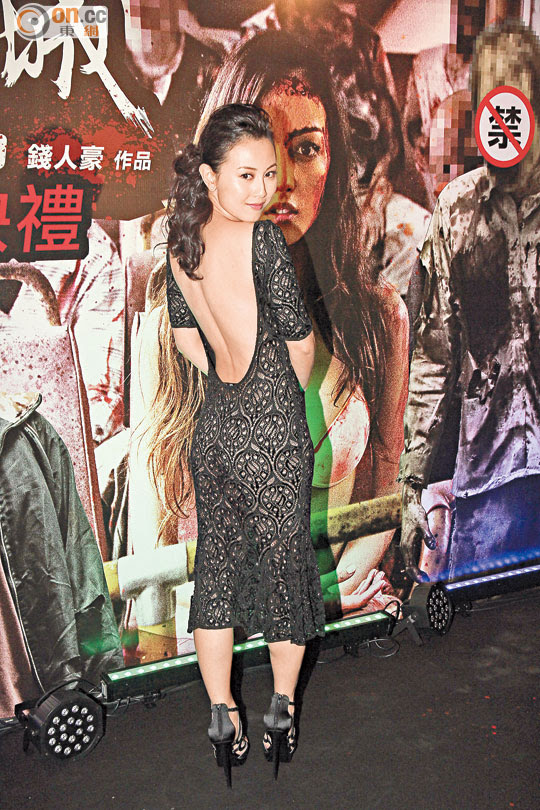 The event held a zombie fighting ceremony. Yuen Ka Man bent down to touch a zombie on the ground. "Congratulate ZOMBIE FIGHT CLUB! When time passes it's very hard to get a playback. I thought I would just touch the zombie, I didn't expect it to leap up suddenly. I was so scared I jumped too." Yuen Ka Man said, "I have been busy with Wong Jing's NGAP WONG (DUCK KING), it's been very stressful so I haven't had time to shop for clothes. Lately I no longer had any chance to dress up because I just finished another nude scene." She said that after the scene she locked herself in the sauna room to settle down and isolate herself from the world. Then she took a cold shower after several hours in the heat. Did she cry? She said no, but she wanted to calm down and reflect on how to perform even better. Later she will have even more extreme nude scenes. She also said that for the scene the set was clear.

JC pointed out that Yuen Ka Man has always been hot and sexy so she did not feel like her spotlight was stolen. In addition she was already very sexy in the film. Lately a magazine said that Jennifer Tse Ting Ting was waiting to wed, Ting Ting's old flame On Chi Kit said that he has not heard and he was not unhappy. He said that if Ting Ting would invite him he would attend, but he believed that she would not. Is he dating now? He said no, but he admitted that he was interested in someone. Was she in the business? He awkwardly said that he did not want to say, for now he has not asked her out yet. Anita Chui Bik Ka said that she dressed up for the occasion and did not deliberately want to steal the spotlight. As for safety precaution, she said, "Earlier I went to an event. Because the tape was poorly applied, it showed up in photos. Today I am using stronger tape, I hope it sticks better." She said that she was not afraid of how much the tape would hurt when it would be removed. The most important was looking pretty.
Posted by hktopten at 4:29 PM