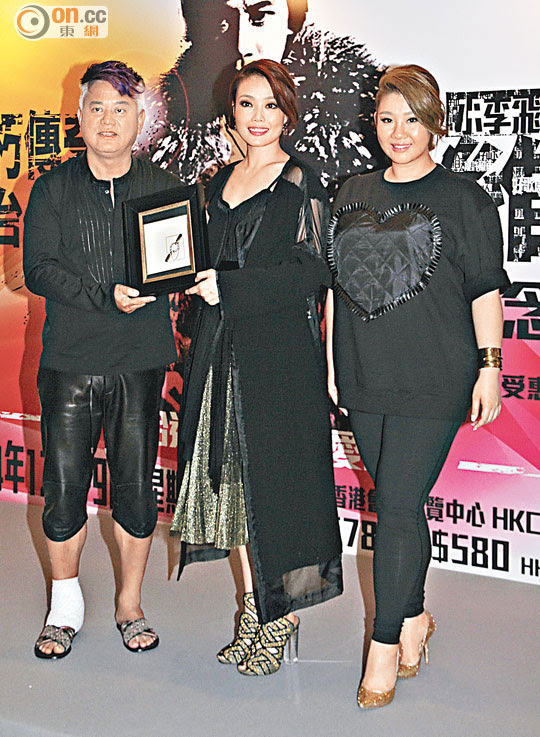 This year would have been the late singer Roman Tam (Law Man)'s 70th birthday. A concert will be held on December 19 at the Wanchai Convention Center, the proceed of which after expense will be donated to "Hepatitis Free". Yesterday at the press conference was Law Tam's disciple Joey Yung Cho Yi, friends Nat Chan Pak Cheung and Joyce Cheng Yun Yi. They remembered their lives with Law Man. Joey even donated the diamond and jade brooch that her mentor left her for the charity auction and continued her mentor's charitable heart.

Brother Lek yesterday attended with his right leg in bandage. He said that he was very happy to be lucky enough to have a friend like Law Man. He not only was an icon who made contributions to the arts, but also taught him many things like how to dress. He said that Law man was a grand master of a generation. Although Law Man has already passed for 12 years, he always treated that Law Man went on a holiday. This time he would perform in remembrance of his friend. He revealed that he often performed SIU LEI FEI DOH and still does. Yun Yi has called Law Man Uncle Roman since she was little. She said, "I always say if Daddy isn't my daddy, Uncle Roman would be my daddy." Did Uncle Roman give her any special gift? He said, "He bought a wooden ballerina from Europe for me, because when he saw the figure it reminded him of me. I still treat this gift like a priceless treasure." Yun Yi also said that she has not thought about what song to sing. She joked, "If I sing PERSIAN CAT I will have to change it to GARFIELD CAT to go with my figure."

One of the organizers Wing Yiu Entertainment was operated by "Father of Concert" Cheung Yiu Wing's daughter Cheung Lai Fong and her husband. She said that it was her late father's will to organize a memorial concert for Law Man. She is now completing her late father's wish, but she regretted that she could not use the Yiu Wing Entertainment title. As the daughter of his second family, she said that her brother of the first family's bankruptcy request for Yiu Wing was still in the courts. She clarified that it was not a fight over inheritance, but her husband and her brother had some mix up of investments. She was not at liberty to intervene.

Yung Cho Yi said that from 1999 when she started studying with her mentor until his passing, she might not have spent a long time with him but he taught her a lot. She said "master not only has a lot of artistic aspirations but also really knew how to enjoy life. I remember once after singing lessons at his home, he would always ask his people to cook a lot of good food to share." Master also constantly took her to different shows to learn. The first time she worked with her mentor was at the Convention Center. Thus this concert at the same location was particularly meaningful. Aside from singing, her mentor also taught her about life and even manners. She said, "I slouch, so Master wanted me to walk with a book on top of my head. His attitude toward life also made him a good role model. He himself was the spirit under the Lion Rock."

Joey donated the brooch that her mentor gave her to the charity auction. She said, "Master left me this brooch before he passed. Although I would miss it, I hope it will be able to help even more people. Because this time would raise fund for Hepatitis Free and Master hoped to cure this illness, I hope to make this priceless treasure even more valuable. Later the auction hall will assess the brooch, the more it will raise the better it will be. (Will you place a bid yourself?) I know many charitable fans are already lining up to put their bids in." Speaking of rumors that she paired up her boyfriend Wilfred Lau Ho Lung with Sun Entertainment, she denied, "I have nothing to do with it. He is very ambitious and wants to do well. In show business no talent would be overlooked. As long as you have the potential you would always run into benefactors." Law Man's other disciple Dior Cheng Yi Kin did not attend. Joey said that she did not know if he was in Hong Kong. She believed that he would have no reason not to attend the concert. The organizer said that Ekin and the Grasshoppers were contacted, but their manager Sandy Lam San San said that it would depend on their schedules.

Reportedly TVB formed The Voice Entertainment Group and fractured its relationship with Emperor. Thus Emperor singers like Joey would not renew their singer contracts. Joey said, "That's what other people say, I don't know either. Do I have to ask Ng Yu? I don't care either way, show business operation isn't limited to contracts. It's like casual dating, everyone have a chance to get to know each other. The most important is to have different platforms to perform. However I still thank TVB for giving me the chance." As for Raymond Lam Fung's addition to Emperor for 100 million, Joey said, "He already has many hundred million of his own! I feel he has great character, he is very nice, very nice overall. I hope aside from singing he will also develop well in film."
Posted by hktopten at 9:21 AM