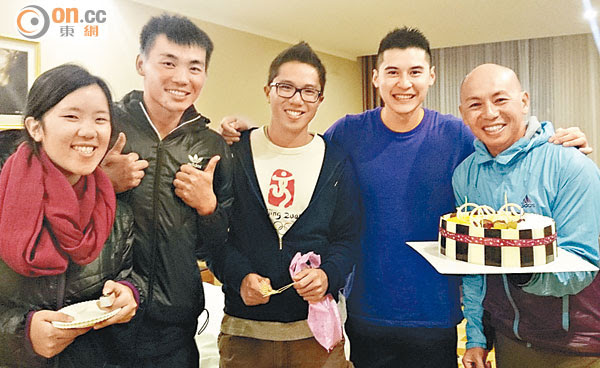 Paulyn Sun Kai Kwan, Carlos Chan Ka Lok and Bonnie Xian (Sin Sik Lai) yesterday attended a skincare product event. Kai Kwan said that she cut her long hair for the film THE MURDERER VANISHES (SIU SUT DIK HUNG SAU). She said, "Director Law Chi Leung called me and asked if I could become a skin head for the character. I very quickly agreed because hair can grow back."

Kai Kwan continued that she cut her hair for two reasons. She really wanted to work with Director Law again and hoped to try a new look. As for her boyfriend's reaction, sh pointed out that many female friends' hearts ached for her and male friends did not like it either. Only her company colleagues felt it was interesting. She said that earlier when she worked in the Mainland, the locals would call her "kid" when they saw her from behind. Luckily her sons were still able to recognize her. Kai Kwan also said that since she played a killer in the film, she had many action scenes. In addition she had to wear a military uniform, leather jacket and boots in 40 degree Celsius heat, she was sweating bullets everyday.

Ka Lok is working on his new film TO THE FORE (POR FUNG). Today he will continue to wrap up the shoot in Shanghai. He said that due to his earlier injury and his training for the film, his arm and even his chest was bigger on one side than the other.

The 12th was Ka Lok's 28th birthday. He said that it was rather memorable. "At the time I was in Yinchuan, I was working on a snowing desert in several degree Celsius cold. However my luggage was lost and I had no clothes. Luckily it was found after over 50 hours." Ka Lok also said that after the shoot when he returned to shower at the hotel, the team and female workers rushed into the room. Director Dante Lam Chiu Yin even shot him in the nude. He joked, "It was truly a pleasant surprise! I have to make the film better to trade for my video."
Posted by hktopten at 1:10 PM