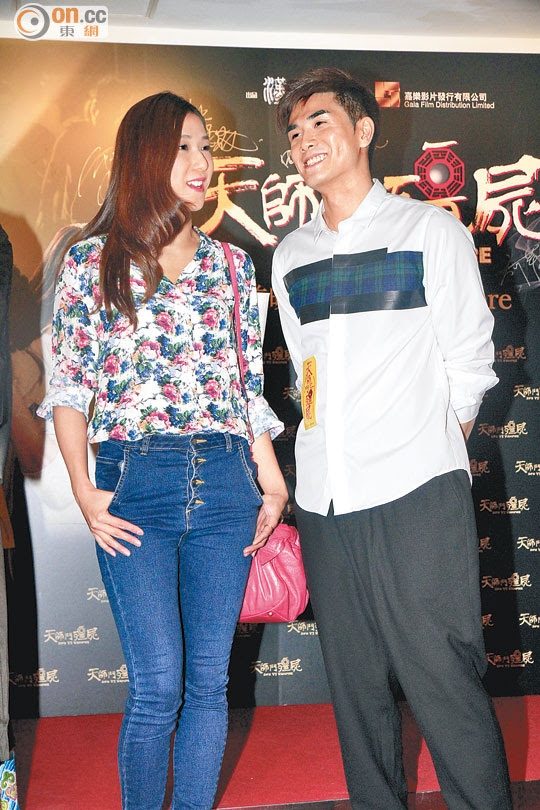 The Wong Jing produced, Kelvin Kwan Chor Yiu, Bella Law Chi Kiu, Michelle Hu Yan, Philip Ng Won Lung starred film SIFU VS. VAMPIRE (TIN SI DAU GEUNG SI) two nights ago held its premiere. Ronald Cheng Chung Kei was absent due to illness. Ng Won Lung's rumored girlfriend Linda Chung Ka Yun, Jacquelin Chong Si Man, Winnie Leung Man Yi and others attended in support. Ng Won Lung posed for photos with Chung Ka Yun at the request of reporters. They appeared a little awkward. Later Ka Yun admitted that Ah Lung invited her to watch the film. "Ah Lung invited me to watch the movie, I just finished the series shoot and had some time so I came. This industry relies very much on relationships, you support me and I support you." Was it the first time that she and Ah Lung posed for photos? She said that she has not attended a premiere in a very long time, probably six years. Was posing for photos with Ah Lung awkward? She said, "Why would it, it wasn't." When asked if the romance has surfaced, Ka Yun avoided the question and said no. She had time and just came to watch the movie.

As for when they would make their relationship public, Ka Yun said, "I'm just watching a movie! I have another friend to watch it with him." Would she sit with Ah Lung? She said that she did not know because the event arranged the seating. Reporters said that if she sat next to Ah Lung, she could grab onto him if she got scared. Ka Yun joked, "I usually close my eyes and curl up in a ball." She said that she was very interested in playing a Western vampire film, but no one has asked her yet. Would she like to perform with Ah Lung? She said that it would depend on fate and timing. If the company had no problem, she would consider any suitable character.

Law Chi Kiu said that in the film she had a back revealing scene. During the shoot she put on tapes and pasties. Her co-star Kwan Chor Yiu once revealed that he had a reaction during an intimate scene wit her, she said, "I think I had a reaction too. Everyone was very focused, but we didn't think about if it was awkward or not." Hu Yan said that in the film she had an intimate scene with Cheng Chung Kei. She said that she has always admired Cheng Chung Kei's acting. Was she afraid that Cheng Chung Kei's wife would be jealous? She said no because it was just work.
Posted by hktopten at 8:37 PM