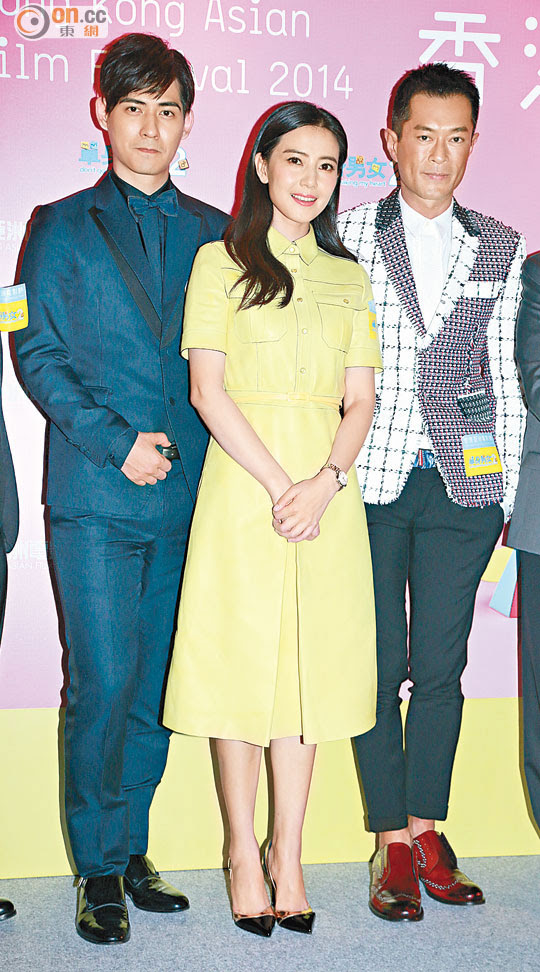 Director Johnnie To Kei Fung's new film DON'T GO BREAKING MY HEART 2 (DAN SUN NAM NUI 2) is this Asian Film Festival's opening film. Last night the film's leads Gao Yuanyuan, Vic Chou Yu Man, Louis Koo Tin Lok and others attended Hong Kong Asian Film Festival opening ceremony. Gao Yuanyuan on November 28 will hold a make up wedding banquet with Mark Chao in Taipei. Although her wedding date was coming, Yuanyuan said that she still had time to promote the film. Did she give invitations to Goo Jai and Jai Jai? She was a little embarrassed and said that she did not know. Goo Jai saved her and said that he will send his gift to Yuanyuan, but joked that it will have to be a surprise so he could not say what it will be. Jai Jai said that he will give a heart to Yuanyuan, wish them union until they are old and gray, parenthood soon and a safe and smooth life. Would Yuanyuan work hard on having a child after marriage? She said that she would like to but it will depend on the situation.

Reportedly Goo Jai and Sandra Ng Kwan Yu co-funded Lunar New Year film GOLDEN DUCK (GUM NGAP) was interested in asking Raymond Lam Fung to play the "duck king". Earlier they were caught at dinner together. Goo Jai said that it was just a friendly dinner. He had no idea at all about GOLDEN DUCK. They talked about that dinner for a very long time. Earlier he flew to France for a three week shoot, then promoted the film in the Mainland. Only recently were they able to put it together. Speaking of Will Pan's accident during concert rehearsal, Jai Jai said that he was not familiar with him but learned from the news that it was very serious. He wished him a speedy recovery.
Posted by hktopten at 4:34 PM