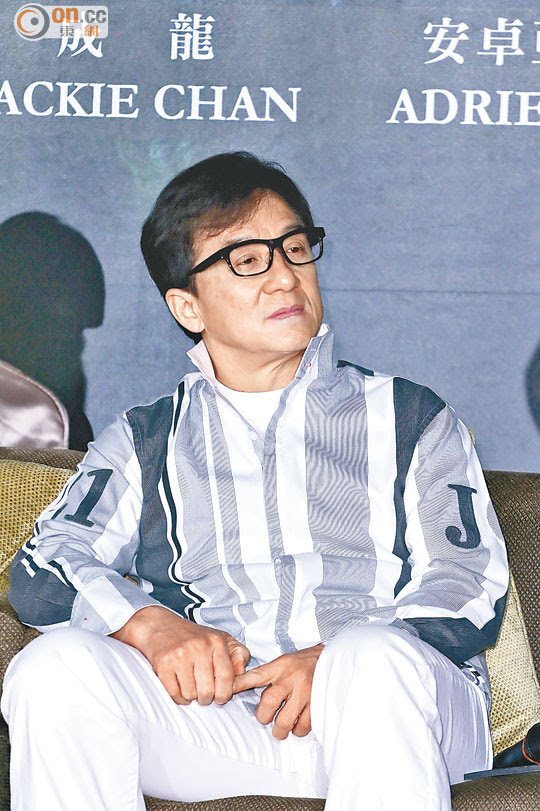 Jaycee Chan (Fong Cho Ming) was arrested in the Mainland in August last year, found guilty and sentenced to 6 months in prison and 2000 yuan RMB fine on January 9th. Fong Cho Ming on either early February 13 or 14 morning will be released. His Mainland management company yesterday issued a press release, Cho Ming on February 14 will hold a press conference. Because the police claimed "capacity" issues, media members must first apply for attendance. After a tally a time and a place will be announced.

Fong Cho Ming will soon be released from prison. Jackie Chan has been busy with the film DRAGON BLADE's promotion. Jackie Chan yesterday attended the new film's press conference in Taiwan with John Cusack, Adrien Brody, Choi Si-Won and appeared to be in good spirits. Host Mickey Huang mentioned that Fong Cho Ming will be released soon and the family will be able to spend the Lunar New Year together. Jackie Chan said, "Do I have to answer this question?" Mickey Huang asked, "Can you?" After a few seconds of silence, Jackie Chan said, "Right, this is also one of the things that makes the 'little jerk' happy. The start of the New Year will be decent, Fong Cho Ming will release and DRAGON BLADE has received very good reviews."

Jackie Chan also said that he did not want to say anything for Fong Cho Ming. Since he is grown he has his own arrangements. He believed that after his release he will face the rest of his life head on. "I am more relaxed now. Let's not talk about him, let's talk about the movie." Jackie Chan even said that whatever everyone wanted to ask they could directly ask Fong Cho Ming when they see him. He would not represent Fong Cho Ming and say anything.

Jackie Chan again stressed that he will not pick up his son from jail. "My son has worked very hard, but has always been under my influence. He has a lot of pressure." He considered whether he was too strict with Fong Cho Ming in the past and hoped that after his release his son will have a better future. "I will help with his comeback."

Mainland star Wang Ruoxin revealed that Jackie Chan offered 1 million yuan for anyone who picked up litter. She missed out because she did not. Choi Si-Won immediately crumbled up two pieces of paper and threw them on the ground, then extended his hand toward Jackie Chan and asked for 2 million.
Posted by hktopten at 1:09 PM