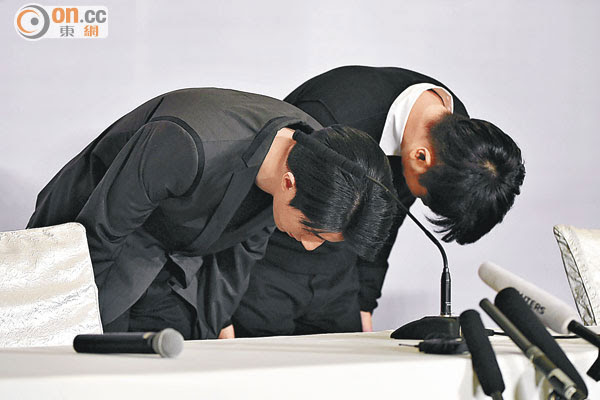 "Sorry, I was wrong." On the afternoon of the 14th, Jaycee Chan (Fong Cho Ming) held a press conference in Beijing. At 2PM he appeared on stage as scheduled and officially apologized to the public for providing shelter to others for drug use. Then he and his manager bowed for 5 seconds. Fong Cho Ming expressed that he made a mistake numerous times, had no reason or excuse and would remember the mistake that he made. From now on he would be a law abiding person; Fong Cho Ming's mother Joan Lin did not appear as the media expected.

"As a public figure, this incident has brought negative influence on the society, disappointed my supporters and caused losses to all the partners that worked with me. I have neither reason nor any excuse, I made a mistake." Fong Cho Ming was dressed in a gray suit, he spoke slowly as he began and often paused. He said, "After this time, I have corrected my view on life and my values. Before I truly did not learn to cherish everything around me. In court I have said that the punishment from the law does not mean I have the society's forgiveness and pardon, because trust needs to be accumulated drop by drop over time." He said that after this lesson he was even more certain about "what he needed to do and he absolutely could not do" for the rest of his life. He would put an effort, through behavior and attitude, to slowly accumulate drop by drop anew. "I would remember the old me because it belonged to a part of my life, specifically I would remember the mistake that I have made."

He also raised his voice as he said, from now on he would not make the same mistake again. He revealed that six years ago he first came in contact with marijuana in Holland but did not continuously use it until the past two years when he started to use it anew. He was asked if his marijuana use was related to his study abroad experience. He replied that he did not want to find any reason or excuse. Speaking of his family, Fong Cho Ming stated, "From now on I would properly cherish my parents to thank them for raising me. Also to all the teachers who have taken care of me over the years, I truly am very sorry. I won't disappoint them from now on." He said that he was less than filial and hoped to properly apologize to his parents. He even hoped to be able to spend the New Year with them because they have not spent a New Year together in a very long time. He even said that during his six months in prison, his parents did not visit. After his release aside from his parents he has not contacted anyone. For now he was not certain when he would return to Hong Kong, but he hoped to be able to see his family as soon as possible. "This would be the best Valentine's Day gift."

He was asked if his father Jackie Chan used any connection to help reduce his sentence. He denied that and said that he received the same treatment as everyone else in the detention center, he did not receive any special treatment and it was rather strict. As for Jackie Chan's absence, he said that Father's work was very important. He did not want his mistake to affect his family. Earlier his mother Joan Lin was rumored to be accompanying him, but Joan Lin still did not appear even after the press conference ended. He explained. "Actually Mama is very afraid of facing the media, so I didn't want her to come. No one wants to see his family suffer." As for his future plans, he said that he was focused on work before and spent less time with his family. Now he will spend more time with his family. As for his damaged reputation, he said that he was very ashamed. He was not a good role model for young people. However he has always loved show business and would not quit. "If I have a chance I wouldn't give up, I will continue to work hard." He said that in the future he would like to direct a film and make more music. Reportedly, Fong Cho Ming has already begun to write scripts and songs in prison. As for the State Administration for Radio, Film and Television's "ban", he said that he would respect the nation's laws and the related policies.
Posted by hktopten at 3:43 PM