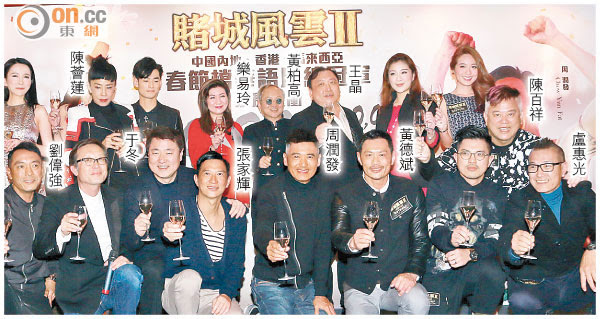 Cheung Ka Fai and Fat Gor spoke to the media together. Speaking of the ideal box office performance, Fat Gor admitted that he was very happy and gave the credit to "Master" Ka Fai. Ka Fai immediately said, "Wow, earlier I was afraid of sinking the ship." Last night a lucky drawing was held. Fat Gor heard that each investor would put in HK$ 200,000 for HK$ 800,000. Fat Gor asked Cheung Ka Fai if he would put in a little for the drawing. He joked that his salary was low and he had no bonus. They both agreed that even if they won they would not put the prize back in.

At the celebration, Yu Dong pointed out that if the Mainland box office will exceed 800 million RMB he will make a third film. When asked about it, Wong Jing said, "after 1 billion." Lau Wai Keung said, "Probably!" Cheung Kai was asked if he will continue to work on Lunar New Year films. "It's in negotiation." If Fat Gor and Cheung Ka Fai would work together again what subject would they like to make? Cheung Ka Fai admitted that he wanted to make a gun fight mob film with Fat Gor. Fat Gor joked, "I haven't held a gun in a long time, I can't do it. My hands shake."

Cheung Ka Fai praised Fat Gor for his infinite charm. When he watched this film with his wife Esther Kwan Wing Ho, she only had eyes for Fat Gor. Fat Gor asked Cheung Ka Fai to bring his wife next time to test it out, and asked if his wife would go on a hike. "Relax and go to make a movie, I used to be babysitting. (Tony) Leung Chiu Wai asked me. Do you know what Second Brother Guan does the most?" Cheung Ka Fai cut in, "Seducing a friend's wife?" The crowd cracked up. Fat Gor pointed out that Cheung Ka Fai was called him dishonorable. Cheung Ka Fai joked, "Who told you to set me up in the film? You asked me to hit 'Chow Yun Fat'!"

"Jing Girl" Man Hoi Ling and Hazel Tong Chi Yui yesterday attended as well as artist Dominic Ho Ho Man. Last year Hazel won HK$ 500 cash prize at the lucky drawing, this year she was dressed in red in hopes of winning the sponsors' HK$ 800,000. Connie was dressed in gold. Speaking of Cheung Ka Fai hoping to work on a gun fight film with Fat Gor, Ho Ho Man jumped in, "I like guns too! I collect air guns as a hobby."
Posted by hktopten at 7:03 PM