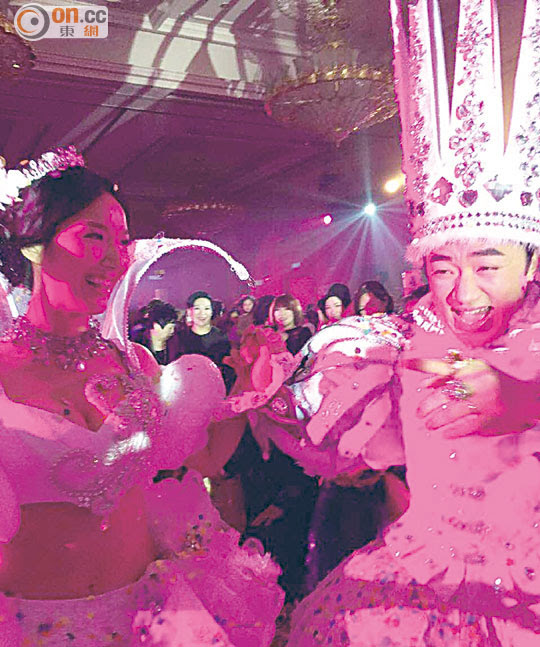 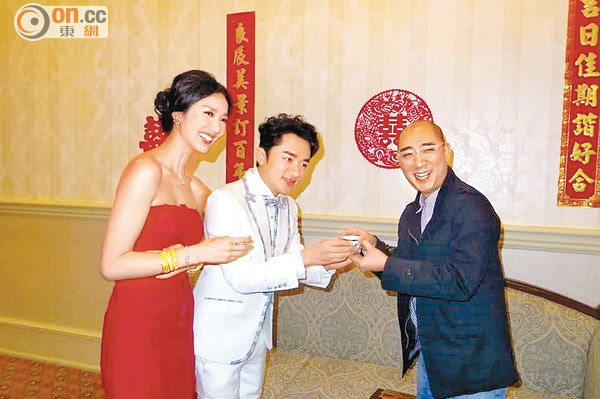 Wong Cho Lam and Leanne Li Yanan two days ago on Valentine's Day officially wed. Last night they held a wedding banquet at Disneyland Hong Kong. The couple yesterday again met the media. Speaking of the wedding night, Cho Lam joked that he was not at liberty to. As a Christian he admitted that he was prepared, but his wife Yanan was not. She even joked that she had to give her a therapy.

At the Disney wedding banquet last night, all the guests came as Disney characters. Cho Lam and Yanan also transformed and prince and princess. Before the banquet they had a cake cutting ceremony with Mickey and Minnie. Then they spoke to the press. Speaking of the wedding night two nights ago, Yanan said that after their Valentine's Day dinner they went to sleep because they did not too well several nights ago. Reporters joked that they wasted their wedding night, she immediately said that she was not at liberty because she really was. Cho Lam jokingly told everyone to imagine it for themselves. He also said that he had to save his energy for the banquet, perhaps he would use it all at once during the honeymoon. They will have dinner with family and friends in Shanghai later, then spend their honeymoon in Europe for three weeks. Would his wife have free rein to spend? Cho Lam said that plane tickets and other expenses added up, but the "princess" asked for romance. Whatever she wanted she would get.

As for the banquet, he invited Teresa Carpio's daughter TV to perform. Louis Yuen Siu Cheung and Rita Carpio (Wai Kei San) would sing as well. Originally in the U.S., Eric Tsang Chi Wai also made a special trip back to Hong Kong. Cho Lam said that without Chi Wai's help he would not have been able to propose, so he was free to have his fun. Chi Wai already said that he would not drink, so he would not have to be carried across Customs when he returned to the U.S. Cho Lam said that he would drink to no end. They were both Christians, did they have to learn the ways of the bedroom? Cho Lam joked, "I am not at liberty to say. I am ready, she's not." Yanan joked, "I have to get some therapy."

Reportedly Cho Lam made HK$ 2 million from this wedding, he clarified that he actually spent several millions. After the honeymoon he will have to work hard to make money. Last night many artists attended and even dressed up in costumes, like Alex Fong Lik Sun and Stephy Tang Lai Yan, Sheren Tang Shui Man, Joey Yung Cho Yi, Kate Tsui Tsz Shan, Angela Tong Ying Ying and her daughter, Timmy Hung Tin Ming and Janet Chow Ka Wai, Shirley Yeung Szeki, Sharon Chan Man Chi, Ada Choi Siu Fun and Max Zhang Jin, Koni Lui Wai Yi and others. TVB executive Elaine Lok Yi Ling was dressed as a witch, Wai Kei Shan was dressed as Maleficent. Choi Siu Fun and her husband even switched gender roles. In five inch heels Zhang Jin said that he was the "Handela Mulan". Because Cho Lam definitely would not dress up as a woman, he could go all out. Ada immediately became Mickey. When their daughters saw them, they said that Papa looked like a princess and even asked why Papa had no breasts. Ada said that this time he loaned her Lunar New Year visit clothes to her husband, she truly made a great sacrifice.