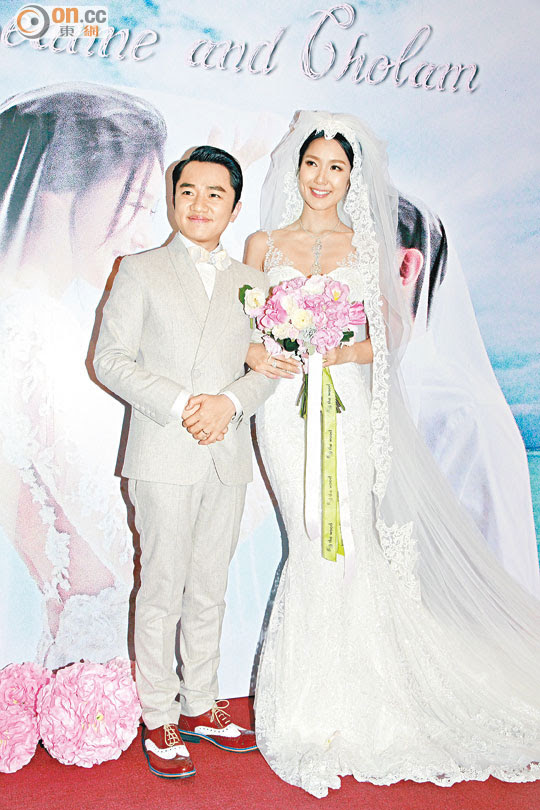 Wong Cho Lam and Leanne Li Yanan after over five years together finally tied the knot yesterday on Valentine's Day, making a lifelong vow in front of the Lord, family and friends. The new couple during the interview kissed six times and broke down in tears. Cho Lam was crying so hard that Yanan had to pat his back to comfort him. He even revealed his vow to Yanan, "I will spend the rest of my life to learn what is love, to faithfully serve you from now on!"

The new couple yesterday held their wedding ceremony at the Kowloon City Baptist Church where Cho Lam was baptized. Many friends in the business attended. After 1PM, the new couple arrived in a white sports car with the license plate "HANDELA". The ceremony officially began at 2PM, as Yanan entered the church with her father. Ada Choi Siu Fun, Max Zhang Jin and others sang the hymn, Cho Lam immediately broke down but still remembered to wipe away tears from the eyes of the also crying Yanan. Cho Lam vowed to Yanan, "I love you, but my love is not perfect, so I would use the rest of my life to learn what is love. Just like I faithfully serve the Lord, I would faithfully serve you." After that they exchanged wedding rings and signed documents. Ivana Wong Yuen Chi performed THE PROMISE UNDER THE RAINBOW to congratulate them. Cho Lam lifted the veil off Yanan's head, took a deep breath and kissed his wife.

After the ceremony, the couple as newlyweds again entered the church to share their experience with guests. Cho Lam broke down as soon as he opened his mouth. "This day finally came. The road from the church door to here isn't long, but all of you are here; just like on my road of life, every face has appeared before, laughed and cried with me. Every warm face was very heart warming. Thank you for giving me warmth today." Cho Lam also gave special thanks to Yanan's parents and said that starting yesterday he would call them Papa and Mama. He thanked them for raising Yanan to be almost perfect and their tolerance for his everything. "We cae from very different places. I don't know Shanghainese, but I know that every word was thoughtful. You don't have to worry that I would hurt her because I would never be willing to hurt her. I still have a long time to spend with you, the daughter who got married is not like water that has been tossed." He also said that 13 years ago when he was baptized in this church his family also came to bear witness, yesterday he still believed that his late father was present. "I have two fathers in Heaven watching over me, at the same time I thank Mommy for her understanding during this time." Yanan kept flirting with Cho Lam. She thanked Cho Lam for choosing her and said that Cho Lam was a priceless treasure.

After the ceremony they spoke to the media. Breaking down at the wedding, Cho Lam awkwardly said that normally he was all laughs so today he broke down all at once. He revealed that his wife also could not stop crying either. When he picked up the bride in the morning, Cho Lam said that the bridal party wanted him to eat his least favorite food -- durian. As for Yanan calling his a priceless treasure, Cho Lam sweetly said, "She is always complimenting me in front of people!" Yanan then said, "Less so today, I always say that he is handsome and talented." He continued that their families would celebrate the holidays on their own, but they would not participate. Because it was the first Valentine's Day after their wedding, they would celebrate at Eric Tsang Chi Wai's restaurant. In the short run they would not have a child as they wanted to spend some time with just the two of them first. In addition, yesterday the wedding party each had 10 people, including Roger Kwok Chun On, Timmy Hung Tin Ming, Bob Lam Sing Bun, Louis Yuen Siu Cheung, Christine Kuo, Linda Chung Ka Yan and others. When asked about picking up the bridge, On Jai said, "The morning got very crazy! We had to wear thongs and eat durian, overcoming obstacle after obstacle!" Yuen Siu Cheung revealed that two nights ago he and Cho Lam had a very rich farewell to bachelorhood, as they spent all night talking but not drinking. Cheung Jai also said that they had a lot of obstacles to overcome when they picked up the bride. Cho Lam had to carry Bob over a pebble path and eat natto with cream and salted hornet. After several hours they were finally able to pick up Yanan.
Posted by hktopten at 3:21 PM