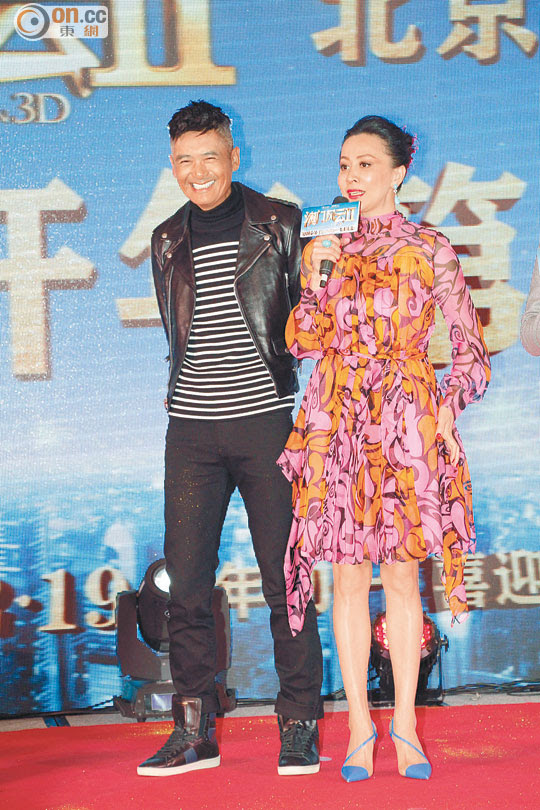 Meanwhile, FROM 2 performed even better in the Mainland. From the Lunar New Year's Day to the Lunar 6th it made 410 million yuan RMB around HK$ 508 million) in less than a week, far more than last year's Lunar New Year film FROM VEGAS TO MACAU first week box office record of 180 million RMB (around HK$ 223 million). Between China and Hong Kong the film made over HK$ 500 million, its Mainland box office is estimated to pass FROM's 520 million yuan RMB (around HK$644 million) box office! With the momentum, the film company could not wait to move the Hong Kong celebration one day earlier to tomorrow!

Director Wong Jing said, "This is the reward for the cast and the crew's hard work, proving that film quality is very important. A good movie not only has to have actor's effort but also team work, whether make up, catering, all the crew have put in a lot of effort. (How would you repay the entire team?) I will put up money for the lucky drawing at the celebration, I will, and the boss will too. (Will you ask Fat Gor?) That's up to the actors themselves."

In addition, Lau Ka Ling after going on a hike of the "Dragon's Back" with Chow Yun Fat went with him again to Big Wave Bay and took a photo together. She also posted many photos with her husband Tony Leung Chiu Wai, Jacky Cheung Hok Yau and Tony Leung Ka Fai online. Wai Jai even put his arms around the singing Hok Yau.
Posted by hktopten at 2:44 PM